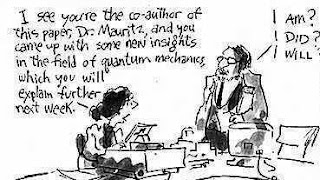 ABC WEDNESDAY
Letter 'Q'
QUANTUM QUERY
I'm constantly bemused by Quantum theory
But afraid to make a really stupid query.
I listen to the wise and erudite
That spout their views on TV every night.
I see the charts and view the animations,
Explaining all the various situations,
But still I feel befuddled and bemused
By all the data that I have perused.
So that is why I'm feeling more relaxed
Since learning even Einstein's brain was taxed.
*
If other people feel the way I do....
That quantam theory almost sounds untrue....
I'll now explain it to my best ability,
Though it requires great cerebral agility!
*
Once I thought that only I was dense,
But the universe, it seems, stopped making sense!
The theories didn't add-up as they should
And this, for Science was bad news, not good.
So then they searched for something so minute
That it was almost too hard to compute.
It seems that nucleus 'stuff' is on the move,
Although that fact is very hard to prove!
It can be doing anything at all,
Until we look at it! (And it's too small!)
*
Now let me say a word on 'Schrodinger's cat',
An animal that we are looking at.
Put the poor creature in a box that's sealed.
We know it's living though it is concealed.
Open the box and add some cyanide!
Re-seal the box and guess if the cat has died!
This is supposed to illustrate
The un-knowingness of an unseen quantam's fate!
Its status is un-knowable, you see,
Until the 'box' is opened and it's free!
'Aha!' you say, 'At last I know what's cooking!'
Oh no you don't! You've altered things by looking!
*
At this point I'm completely mystified!
I almost hope the wretched 'cat' has died!
I close with yet another illustration!
To me it's just an added complication!
But there may be some readers who declare
'Eureka!' and then jump into the air,
Because, at last, they understand the theory!
If so, please let me know!
I'm feeling weary!
* 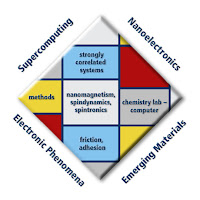 Clancy and Paddy were farmers, and they had a pig apiece.
As well as a clutch of chickens, some ducks and a dozen geese.
But, each having one pig only, they decided to share a sty;
This cut-down on their overheads which were sometimes rather high.
All went well until one day Clancy said 'It's fine
But when I look at our two pigs I can't tell which is mine!'
Said Paddy 'Will it help at all if I cut off my pig's ears?'
And, straightaway. he did the deed with a pair of garden shears!
All went well till Paddy's pig, in a violent angry fit,
Chewed the ears off Clancy's pig! Yes! Every little bit!
Two ear-less pigs stood in the sty. The two men scratched their heads.
They mulled the whole thing over when they met in the milking sheds.
'We've got an awful problem and we don't know where to start!
Both our pigs have lost their ears! We can't tell them apart!'
Said Paddy 'This is tricky! But can we put things right
By saying mine's the black pig and yours is the one that's white?'
*


We had a great day on Monday. We had intended to do our long play at the Belmont Golf Club but time didn't allow and so we resurrected an old one called 'Unhand Me!' which involves the audience  taking part. We had a great crowd and the participants were just as willing to make fools of themselves as we are, so the atmosphere was very merry. 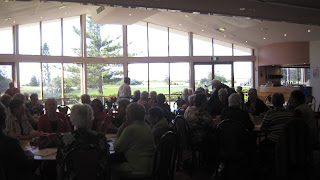 The hall looked out over the golf course to the ocean immediately beyond. 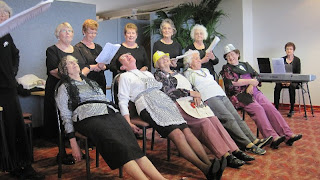 The audience participants were quite prepared to play dead!

And all the flowers were still in full bloom.
Posted by Rinkly Rimes at 7:31 AM

Your QUERY left me QUIZZICAL, since I cannot suss out QUANTUM physics.

I like the sound of the word 'Quantum' but that's as far as I go!
I liked the story of the pigs - that's a classic:-)

Got a real chuckle from the second poem but enjoyed both! You have such a way with words!
Have a wonderful weekend!