A leafless branch of silver rends the sky﻿
And the darkness shudders.
Trumpeting, the elephants enter the arena. 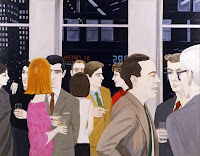 They met at a cocktail party and a cursory glance revealed
That both were smart and wealthy and, in a word, well-heeled.
She was a blonde, with a chignon, and a very unlikely tan.
He was tall and courteous and just her sort of man.
Cora, for that was the lady's name, kept her eyes on Lance all night
And those eyes were heavy with make-up and very blue and bright.
Lance couldn't help but notice that, whichever way he turned,
Her eyes were fixed on him alone and with excitement burned.
At last, in exasperation, he went up to Cora and said
'Excuse me, have we met before?' (Oh he was so well-bred!)
''No we've never met before' she said, still as intently gazing,
'But you look like my third husband. The likeness is amazing!'
Not wishing to be impolite, making small-talk as you do
Said Lance 'So you've had three husbands?'
'Oh no!' she said 'Only two.'
*
Posted by Rinkly Rimes at 10:55 PM

Enjoyed both poems, but I think for preference I would choose "Leading Lady".

I loved the first ... then read the second ... thought it ever so clever and then I read the last line and of course was dazzled!

compact on the first one, well done.

playful and smart one on the second one.

The second is very clever and most entertaining. Nicely done.

Powerful haiku and the second one is charming and funny

I loved them both!