SIZZLING SUCCESS!
The men have returned from hunting,
All of them bold and brave.
The women and children are waiting
Deep in the depths of the cave.
The men grunt as they cut up a mammoth;
They grunt as they carve up the chops;
They grunt as they rub their stomachs.
The grunting never stops.
It's then that the women take-over,
As they bustle around with the food.
Grunting, they have discoverd,
Is masculine, rough and crude.
While the men have been been busy grunting,
The women have learned to speak!
They've been chattering away to the children
Like mad since Saturday week!
As the mammoth steaks are cooking
A strange new sound is heard;
The females of the species
Have invented a brand new word.
They have heard the sound the fat makes
As it's dripping on the flame;
They're inventing onamatapoea
Though they've never heard the name.
As the fats drip into the fire,
They let out a glad refrain!
'Sizzle!' they shout in triumph,
'Sizzle!' they cry again.
*
The men, who, still, are speechless,
Gape at this curious stunt.
And, ever since then, if you're manly,
You don't do much more than...grunt.
*
---------------------------------------------------------------- 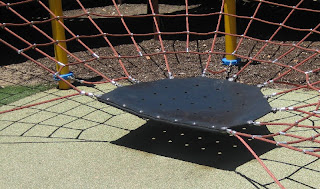 MASQUERADE!
At the children's playground I spied this masquerade;
Spider-like and yet a trampoline.
And I wondered what the children thought when they scrambled up on it;
Surely the strangest insect ever seen.
Did they see a giant spider, and clamber on its web?
Did they bounce on it to show their lack of fear?
Did they giggle with excitement at their game of 'let's-pretend'
As they waited for the Spider to appear?
We can never think as children think; those thoughts are truly gone,
And we cannot quite remember what we thought.
Imagining was part of it, of that we may be sure
But our memories are of an adult sort.
It could be that the children don't think very much at all
As they gambol in this pleasant parkland scene.
Maybe little Johnny just looks at it and says
'I think I'll bounce on that old trampoline!'
*
Posted by Rinkly Rimes at 5:53 PM

Two good 'uns, Rinkly. I specially enjoyed your sizzling foray into the invention of language.

Very clever and fun poem. I can hear the men grunting and the women shouting out 'sizzle.'

I really do enjoy your rhyming skills -- very good.

Both poems are sizzlers.