﻿
OCAL
SUNDAY SCRIBBLINGS
http://sundayscribblings.blogspot.com/2011/05/268-better-late-than-never.html
suggested
Better Late than Never.
(I almost complied!)
TRUANTS
(Another one for Children)
'It's Rick and Ruby, Teacher!
Look! They're late again!
I bet they've been playing truant
Down in Raspberry Lane!'
*
The goody-goody children,
Were happy to declare
That, when the work had been given out,
The two had not been there!
The Teacher spoke quite sternly;
'For a punishment' she declared,
'You must say what you've done this-morning,
Your adventure must be shared.'
*
Said Rick 'We saw a lizard,
Hiding underneath a stone!
And then we saw some fallen leaves
That the wind had blown.
We blew a dandelion clock,
And climbed a little tree,
And then we watched the antics
Of a furry bumble-bee.'
Then Ruby, who was younger,
Said 'I watched the clouds float by;
I lay in the long grass on my back
And looked up at the sky.
We saw the farmer ploughing
In the meadow by the stream,
We looked at little fishes
And saw their bright scales gleam.'
*
Said the Teacher 'Enough of punishment!
Enough of all this talk!
Stop what you're doing, children!
We're going for a walk!'
*
--------------------------------------- 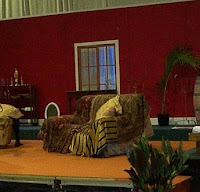 ALL SET!
The stage is a blaze of colour! The actors await in the wings.
What can go wrong this-evening? Any number of things!
I can forget my lines, for one! Or trip over two left feet!
I can feel sort of wobbly and go as white as a sheet.
Maybe Fred won't turn-up, because he's missed his bus!
The director's bound to lose his cool and start to scream a cuss!
Maybe there will be no audience to watch our enterprise!
Maybe Alice will twitch a lot when she's feigning her demise!
Something's bound to go wrong! It's written in the stars!
Oh dear! There's the music starting! I wish I lived on Mars!
*
But, oh, the power of adrenalin! It always sees me through!
I step out onto the floodlit stage and there's nothing I can't do!
*
Posted by Rinkly Rimes at 5:36 PM

Your delightful first piece reminded me so much of my childhood, but at least I did all those things on the way home in the afternoon!

Alas the stage was not for me and my confident self would indeed turn into a bumbling fool.

What a delightful duo!

I particularly like your children's poems, I think all together they'd make a great book for kids.

Two delightful kids, and what a perceptive teacher. Lovely.

I just loved both of those poems. I can definitely relate to both of them. They painted a beautiful picture for me. Thank you so much!

We love creativity, your input is valued.

Cheers.
Happy Friday!
Hope to see you in!