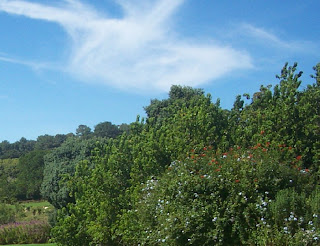 WIDDERSHINS!
My life as a cloud isn't easy;
I'm blown this way and that when it's breezy.
When I'm longing to drift,
That old wind starts to shift,
And I'm tossed here and there till I'm queasy!
*
The wind keeps on changing its mind!
It's hither and thither, I find.
First it blows to the West,
Then it thinks East is best.
The trajectory's never defined!
*
When I think that we'll head out to sea,
Where we'll float unencumbered and free,
It's back over the land!
No direction is planned!
Oh dear! Now we're off again!
Wheeeeeee!
*
---------------------------------------------------------
PS
Life has been full and pleasant during the last few days but I'm having camera problems so I haven't photographic evidence.  I conducted my U3A poetry session on Tuesday. I took along copies of blog-poems (other peoples') which had been written in response to memes and the different approaches and techniques were discussed. This made for a lovely meeting. In the afternoon, we enjoyed our monthly Scrabble session. On  Wednesday I went out to lunch with Malcolm's Probus Club. We booked a private room at the Beaches Hotel looking out over the sea, so it was a delightful venue as well as a great social occasion. The weather has been glorious lately so the view was sparkling. Yesterday the Merry Mellows met to organise the choral part of our next show, getting a tape prepared for practices. This was very entertaining as well as being useful.
Then, at night. a great thrill when Rebecca took me to the City Hall to hear the Soweto Choir. This was a delayed birthday present and well-worth the wait. The singing was unbelievable, and the personalities of the singers infectiously joyous, while the costumes were a riot of colour. Thank you, Becca. 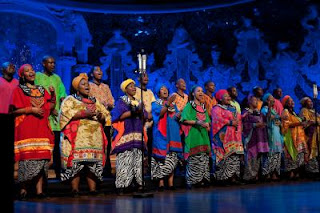 You certainly know how to have a good time. You and your friends are a hoot!