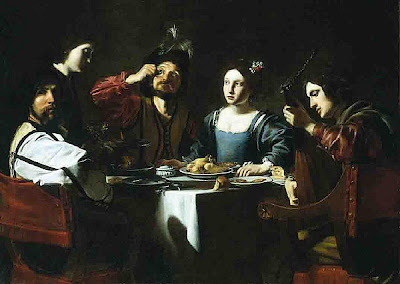 Tournier
MAGPIE TALES
http://magpietales.blogspot.com/2011/05/mag-67.html
supplied the art work
THE MERRY MAKERS
'Let us make merry' said Pierre to Henri;
'Let us visit the local hostelry;
Let us find a wench who'll do us proud;
Wenching's something a man's allowed.
We'll hire a musician, and order food,
And get the young lady in the mood.
The younger the better, it seems to me,
When it comes to a night of debauchery.'
They found a wench in need of a shilling,
One who pretended to be quite willing.
They rented a room, the music played,
And, on the table, food was laid.
Claudette was pale and unprepared,
Scarcely formed and mute and scared.
In came Gaston, a slip of a lad,
Expressionless and plainly clad;
A village boy just earning a sou,
A boy whose heart was strong and true.
Pierre and Henri were steeped in wine;
They didn't see the girl's eyes shine.
They didn't see the look of love......
Love wasn't wasn't what they were thinking of.
The waiter fumbled  and hesitated
Serving two men he already hated.
What had she whispered into his ear?
'It's a way of making money, my dear.
Think! We can name our wedding day!
These are rich men! They will pay!'
The food was gone, the musician departed.
And Gaston withdrew,
Broken-hearted.
*
----------------------------------------------------- 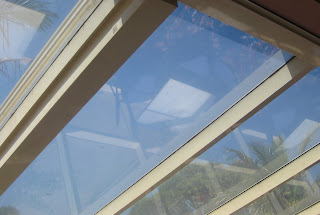 PERSPECTIVELY SPEAKING
Lines diminishing, lines intersecting,
Not a view that I was expecting.
A world in the sky, it's quite a surprise!
In fact I could scarcely believe my eyes!
The blue shot with silver, the silver with gold,
The leaves so feathery, frames so bold!
I got a really bewildered feeling,
Merely from looking up at the ceiling!
*
Posted by Rinkly Rimes at 11:23 PM

There are no words to describe that wonder of this piece..well played!

Love the humour of this piece. It flows beautifully. Maybe not a great deal has changed since 1625!

"Claudette was pale and unprepared,
Scarcely formed and mute and scared."has pacing and breathlessness which along with "love's wasn't what they were thinking of"are lines which lay out the scene so clearly,also liked"wenching's something a man's allowed".Nice.

Ah, Gaston..my heart aches for you! So well done..so accomplished!

Your Magpie? So much fun, so well done.

Not ony can you tell a good tale, you can do it in verse! You observed this painting closely and were able to surmise what could have taken place with a shrewd eye. Excellent! xo

What a wonderful poem! I think you're so clever to be able to do this. Lovely Magpie.

Loving both of them again!

Game on! For sure. Well done - I love the view through to the sky - it's mesmerising.

Well written, Brenda! The story that has been playing forever now... only, we refuse to see it for what it is!

You have narrated it very beautifully here!

I love the Merry Makers. So well done. Congratulations.