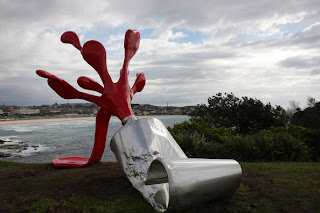 SUPER GLUE!
I'm not a touchy-feely type; I'm even a little cold.
If someone plants a kiss on me I think they're very bold!
I sometimes touch another's arm, expressing sympathy,
But that's as far as the sentimental ever goes with me.
My parents weren't demonstrative; I think it's in my genes.
I like to express emotion by other, less tactile, means.
*
So, when I see old couples still walking hand in hand
It's something that I marvel at and cannot understand.
I suppose I'm a wee bit jealous, that's a fact I must admit;
It would be nice to be 'normal'; I'm not; that's the end of it.
But then I start to wonder, is their marriage without flaw?
Are they expressing undying love as they walk on paw-in-paw?
*
And then the cynic takes over and I write a scenario
In which she isn't his Juliet, and he isn't her Romeo!
Did they start holding hands in their twenties? Are both of them sick of it now,
But neither has the courage to take that final bow?
Did it cross his mind at thirty that the habit should be dropped?
Did he worry about her reaction if the hand-hold suddenly stopped?
*
Has she secretly felt embarrassed at the public show of affection?
Has she thought to herself 'Today's the day I'm severing the connection'?
But the right time, maybe, never came. She could never be the first.
'To be or not to be' hand-held! Which attitude would be worst?
So they're still holding hands at sixty! At eighty it's still the same!
They're both involved in a never-ending 'we are lovers' game.
*
Maybe I'm bitter and twisted and a little unkind as well.
Maybe the ancient 'lovers' are under a magic spell.
When my husband and I are out walking we walk along as mates;
Protestations of marriedness neither anticipates.
Maybe they're sorry for us, the hand-holders we see,
But I feel really comfortable so that's all right with me.
*
Posted by Rinkly Rimes at 6:00 AM

Ha ha ha! so true RR, who knows what lies beneath the surface!
I love the Sculpture by the Sea too.