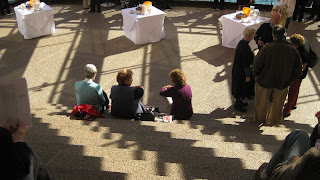 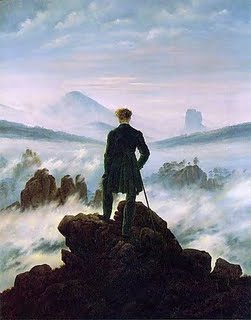 Friedrich
MID-LIFE CRISIS!
(Inspired by the picture above!)

My Father had a mid-life crisis! And I remember it well,
For when it was all over what a tale we had to tell!
He found it hard having daughters; seven of us in a row,
Sitting around the house all day with nothing to do but sew!
The servants, too, were female, except for Jim in the stable
And three or four little serving maids used to wait on us at table.
Mother had the vapours at least once or twice a week
So the cause for dissatisfaction wasn't too hard to seek.
She'd lie back on the sofa, when she felt out of sorts,
Whispering to my Father 'Bring me the smelling salts!'
My sisters and I needed husbands, and I fear that wasn't all,
Each one must be 'presented' at a special coming-out ball.
We could only marry in order and Sophie was proving slow,
With a face like hers it was difficult to interest a beau!
We were chattering round the table one evening by candle-light,
Deciding which outfit we would wear at the next week's At Home night.
I favoured my pleated muslin and Felicity started to cry
Sobbing 'If I can't have a new dress I think that I shall die!'
Father suddenly sprang to his feet saying 'I have had enough
Of all this domestic friction and all this female stuff!
I'm off to climb a mountain! That's what I want to do!
I'll be truly masculine and get away from you!'
Though he was wearing his frock-coat, the one with the pleated back,
He took his stick and left us to find a mountain track.
We watched him go with horror, we longed for his return
But he never came back to his loved ones; we were left to yearn.
They say he climbed a mountain, one with a yawning drop,
Looked down at the mists below
And threw himself off the top!
*
Posted by Rinkly Rimes at 8:52 AM

Except for the father leaving, I was reminded of Pride and Prejudice! As for 'Tea and Symphony' the Opera
House is the one place I would like to visit, besides yourselves! I find the architecture awesome and recently read something about the difficulties of the
architect's design, who built it. Its location is
a brilliant choice to show it off.

'Tea and Symphony' sounds just right to me!

I THOUGHT I’D SPEAR A SHADOW

I thought I’d spear a shadow
And fork it in my mouth,
But these were tough old shadows—
The tines they went down south!

'Tea and Symphony', I like it! The tea part made a neat ShadowShot too.

Poor father in your poem! Just too much estrogen floating about I guess.hehe. Happy SSS.

Oh my, I do hope this was only inspired by the photo and not your real life father! Though you seem too young to have had a mother who would have had vapors! Hope you enjoyed the opera! (Reminded me that you are in that part of the world where it is autumn!)