On the Other Hand

﻿
WRITER'S DIGEST
http://blog.writersdigest.com/
suggests the theme 'On the Other Hand' 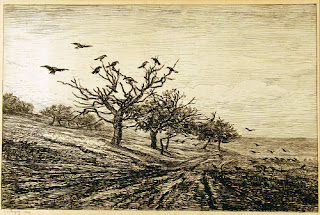 When I was young I had a book,
In which I often used to look.
The pictures, in an olden style,
Would make me cry and make me smile.
I lost the book in War's alarms,
But still I pondered on its charms.
The story was forgotten too,
As old books were replaced by new.
I only knew that there were crows,
Lined up in trees in long dark rows.
And I recall the plaintive cry,
As crows sent mourning notes on high.
As I recall, they coud not rest;
Their fledglings murdered in the nest.
A morbid tale for childrens' eyes,
And yet the theme was very wise.
The words that always touched me so?
'There is no joy unmixed with woe.'
And all through life it has been so;
'There is no joy unmixed with woe.'
*
Posted by Rinkly Rimes at 10:01 AM

So very true on that first write... sad but true. Love the second! Thanks for stopping by.

And why do we have to keep seeing his image, as previously known, every time there is a new revelation, one wonders.