In Charge of the Glitch! 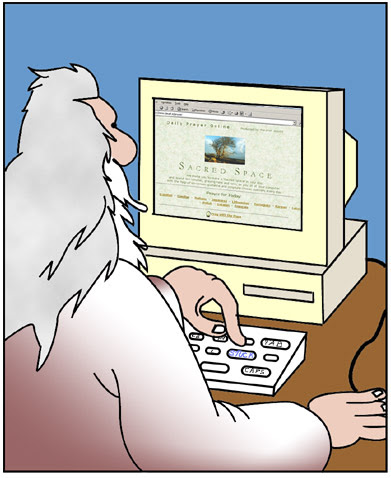 ﻿
CARRY ON TUESDAY
http://carryontuesdayprompt.blogspot.com/2011/05/your-prompt-for-tuesday-may-23th-this.html
asks us to use suggested words as a jumping-off point
This week, we have chorus from Joan Osbourne’s song ‘One of Us’.

"What if god was one of us
Just a slob like one of us
Just a stranger on the bus
Trying to make his way home "
IN CHARGE OF THE GLITCH!
If ever I think of God, and that is rarely,
I certainly do not picture him on the bus!
I still have that throne-in-heaven picture of him,
A Being the very opposite of us!
A slob, maybe, because he is unshaven,
But not some mortal trying to make his way;
The idea of Him sort of floating 'up there somewhere'
Is from childhood, but it lingers to this day.
If I were a small child these days I would see Him
A stranger with a computer in the clouds,
Clicking away, with pleasure, as we all do,
And quite removed from bustling human crowds.
Just like one of us he's tapping at his keyboard,
Uploading and downloading day and night,
Deleting people left and right and centre,
Deciding what is wrong and what is right.
And if He is fumble-fisted as he's tapping
The whole darned system ends up on the blink;
I often think He isn't even trying.......
Look at His world! We don't know what to think!
No! God on his way home on 'Number Forty'
Just doesn't even strike the slightest chord,
(As to 'was one' ........ well that's simply not good grammar!)
All in all, I am completely under-awed.
*
------------------------------------------------------------

A TENTATIVE TAP!
I was in a bit of a hurry and the taxi was taking its time,
But I wasn't irate, I was really good-humoured and calm.
I just leaned to the driver, just urging him on
With a tentative tap on his arm.
Imagine the shock when he screamed fit to bust!
The car flew through the air and we crashed!
And we hit a shop window and went through the glass
And everything in there was smashed!
Later on when the driver and I were alone
I said to him 'Are you a freak?'
'Not really' he answered, 'But you see it's like this....
I was driving a hearse till this week!'
*
Posted by Rinkly Rimes at 2:26 PM

the second is very funny!