SILENCE
Ruby and Alex had quarreled, as they'd frequently quarelled before.
Ruby had said 'You're an idiot!' And Alex replied 'You're a bore!'
Ding-dong went their words back and forward, while they just got nowhere at all,
They'd run-out of insulting phrases and they'd got no more names they could call.
So they both sulked, reverting to silence, a silence to cut with a knife.
Ruby wrote little notes to her husband; Alex wrote little notes to his wife!
' My car has a knock in the engine' wrote Ruby (the car being Alex's realm)
Alex wrote 'Something's 'off' in the kitchen' ( that's where Ruby held sway at the helm.)
Back and forth went the notes for a fortnight and neither would break down and speak;
For both of them yearned to be top-dog and speaking would mark them as weak.
Now Ruby would always rise early; she liked to indulge in Tai Chi
While Alex was such a deep sleeper her never woke up naturally.
Well, it happened that there was a meeting, he needed the earliest train;
He knew that he'd have to wake early and that fact was rather a pain.
So he wrote a request on some paper and gave it to Ruby to read.
'Please wake me at five in the morning.' A straightforward message indeed.
Well, he woke up at 10.00 the next morning; the sun was quite high in the sky,
He'd missed his important engagement and he just couldn't understand why!
Then he saw a small note on his pillow. Yes, Ruby had written a gem!
'Wake up! Or you'll miss your appointment! It's already five-thirty a.m.!'
*
-------------------------------------------------------------------------------- 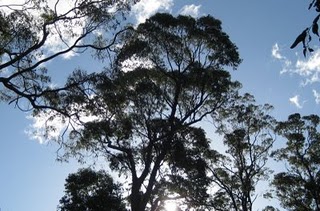 GUESS THE SEASON!
The sky of an Australian winter; imagine a chilling breeze

But all the leaves left growing on the eucalyptus trees.
We rarely see bare branches and yet we often know
That somewhere in the hillsides the rain has turned to snow.
So, although this looks like summer, remember the winter chill
And the snow that's falling gently on some high but distant hill.
*
Posted by Rinkly Rimes at 6:12 AM

I really loved this - wonderful.