(Not quite what was asked for, I'm afraid!)

UNTITLED
They stick their labels on me, indicating parts quite vital,
But what I'm really after, isn't labels, it's a title!
My cuboid bone's unchanging, it always keeps its name;
I'd really be much happier if my titles stayed the same.
My collarbone and sternum  have been labelled such through life,
While my titles have been 'Baby', 'Sweetheart', 'Teacher', 'Mother', 'Wife'.
Sometimes I've been called 'Actor' and 'Poet' has been used,
And there's been 'Stupid', there's been 'Fool' when I have been abused.
Recently I've heard  'Senior' and 'Pensioner's another,
And then there's the title I quite like; the title of 'Grandmother'.
So is it any wonder that I'm really in a jam.
Till I get a permanent title I don't know who I am!
*
Oh dear! I've suddenly realised I haven't been too clever!
When I get the title 'Ancestor' I'll keep that one for ever!
*
----------------------------------------------------- 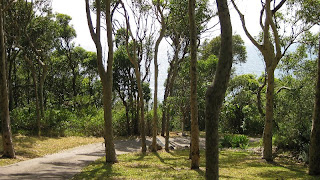 Winding down to Dudley Beach
The gentle pathway goes.
And why Dudley is called Dudley
I doubt if anybody knows.
There's another place called Dudley
Near Birmingham, U.K.
Some immigrant took the name with him
When he sailed so far away.
Aborigines lived around here, first,
Traces of them are found;
Middens for their rubbish,
Implements in the ground.
I often think their lives back then
Must have been so very pleasant.
But mostly Europeans
Live around here in the present.
First there was a coal-mine,
And immigrant miners came;
That's when the coastal settlement
First received its name.
So one can presume a miner
Maybe a homesick one,
Gave the name to the coal-mine.
Maybe that's how it was done.
But, like many ancient coal-mines,
The Dudley Mine closed down,
And now it's a thriving suburb,
One of the best in town.
Because of the views of the ocean
'MacMansions' have been erected,
Wealthy people live there
And snobbishness is detected!
But the view presented up above
Is a timeless one, for sure,
As the gentle pathway goes winding down
To Dudley's sandy shore.
*
Posted by Rinkly Rimes at 3:36 PM

Untitled is brilliant. So, I am sure, is Coastal Pathway, but reading it I was still stuck on Untitled and couldn't do it justice. I shall have to come back to it. As for Untitled, I really can't find words to explain how good I think it is. Maybe when I come back...

Stuck on untitled too! Brilliant stuff!

Untitled - a great journey through time and all the versions of you. A truly thoguhtful piece.

I like "Untitled" very much and especially admire when actual rhyming works so smoothly and flows so well. I also enjoyed "Pathway." I love that the Internet lets us communicate so easily with people all around the world. I bet few people in Dudley, UK, know there's another in Australia!

Untitled took me away; the names we have and how we come by them. Very clever~ I loved how it flowed~

Wow, you got called all there is significant, great writing to sum up your journey till date.

Loved your untitled, it was a pleasure to read and enjoy, thanks!