CARRY ON TUESDAY
http://carryontuesdayprompt.blogspot.com/
This week we have to use the famous words from Shakespeare...
"All the world's a stage, and all the men and women merely players"

AUDIENCE OF ONE
If all the world's a stage
With an audience of One,
Is He sitting there in judgement
From the time the play's begun?
Is He holding his auditions
And declaring who will act
And is He doling-out the roles,
On a stage which is tight-packed?
And are we merely players
Like puppets hung on strings,
And is He in charge of properties,
The crowns, the shining wings?
Since He has sprinkled attributes
Among the fawning players,
And sorted men and women
Into variegated layers
With successes at the very top,
The mediocre in between
And the failures at the bottom,
Not allowed upon the scene,
Achieving even a walk-on part
Is like crying for the moon,
Even if we act quite well
And can even hold a tune!
And if the 'audience' likes the play
Will there be a standing ovation?
Will He thunder-clap his god-like hands
In a heavenly proclomation?
It's all too hard for me, my friends,
I feel much more at home
With those very human, squabbling, lying,
Gods of ancient Rome.
*
--------------------------------------------------------- 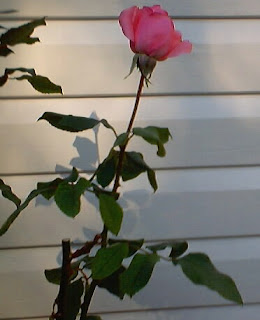 BALLERINA!
A ballerina in the footlights, with tutu pinkly flared!
She has just made her entrance! She is a little scared.
A shadow is her scenery, painted on pristine white,
As she stands there, a little breathless, blinking in the light.
*
Posted by Rinkly Rimes at 9:52 AM

Something to ponder...love it. And the second one is pure pink passion...lovely.

I am standing in front of the pc and clapping my hands like a dork!

Both are beautifully written... they kept my attention from beginning to end! Stop in & read This Show Called Life

Yowza! I wonder what the juge is going to think of my response tpo this prompt?!
http://www.kimnelsonwrites.com/2011/05/02/at-this-stage-bold/

Brenda, as always I am awed by your gift of words and thought. Sometimes I wonder about things too.

I hope we all get a standing ovation just for trying. great poem.