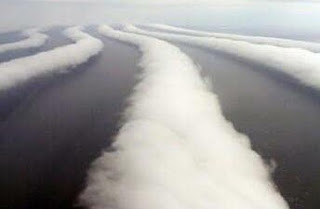 THEME THURSDAY
http://themethursday.blogspot.com/2011/05/thursday-may-26-2011-cloud.html
supplied the illustration
SKYWRITERS
I dreamed I was a sky-writer
Who wrote up in the blue,
Creating cloud-like scribblings.....
Sky-writers often do.
I let rip in my aeroplane
And let the mist spill out
And then I looked both sides of me
And gave a mighty shout!
I wasn't on my own up there!
When did four planes arrive?
For now I had companions!
I was one of five!
We set-about writing music....
We even drew a clef,
We drew five lines to be the stave!
EGBDF.
We drew the notes of music,
Crotchets and minims too;
All fashioned by our cleverness
Up there in the shining blue.
And people on the ground looked up
Expecting suns and moons
And all they saw was music,
All they saw were tunes.
And everyone began to sing
With one almighty voice.
Our music in the heavens
Made everyone rejoice.
Yes! I had helped to save the world
With a universal theme.
*
It was great while it lasted.
But it was just a dream.
*
--------------------------------------------------- 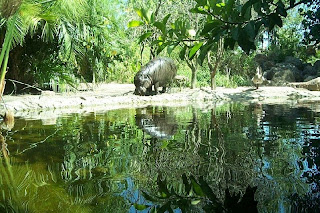 HIPPO HAVEN
A jungle shot? No, not at all; a shot in Melbourne zoo,
Where a gentle baby hippo browses, as all hippos do.
I wonder if some species-memory persists in such a case.
Does he have a longing for a very different place?
Does some instinct linger, that he can never smother?
Some sense of where 'the right place is' inherited from Mother?
I wonder if he lifts his head and breathes the morning air,
And aches with a terrible yearning, for somewhere 'over there'.
The bushes and the trees create a sort-of jungle scene,
And the water tries to be a very real Limpopo green.
The Keepers tend him carefully; his diet is just right,
But does he dream of Africa in the darkness of the night?
*
Posted by Rinkly Rimes at 3:36 PM

What a dream! Love it!

I ALWAYS enjoy your rhymes! This one is no exception. A skywriter would be a very fun job!

Loved your poem, Skywriters. Charming. I read it twice ;)

I haven't thought of a sky writer in awhile ... always thought it would be fun to do!! Nicely penned!!