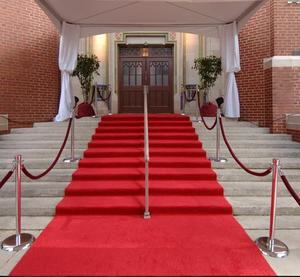 
RED CARPET TREATMENT
I've never had Red Carpet Treatment, nor, I guess, have you.
In fact, I think a taste of it is very overdue!
No-one has clapped and cheered me as I've stepped from a limousine.
No-one has ever gasped 'That's the prettiest dress I've seen!'
I've never nodded winsomely at all the cheering hoards
Who recognise I'm special from the way I tread the boards!
They say Red Carpet Treatment began in ancient days
And we have simply aped it with our more modern ways.
When a warrior reached prominence he walked a path of red
That represented blood and all his foes who now lay dead!
Then the railroads in America, with not a thought of blood,
Began to use red carpets when the platforms ran with mud,
Enabling the wealthy to step down from the train
And not be inconvenienced by the miserable terrain.
The colours red and purple simply reek of Royalty
But red is now predominant as we now clearly see.
Imagine a famous film-star having to walk on blue!
They'd throw a little tantrum! It certainly wouldn't do!
*

FIRST IMPRESSION
(An old English rhyme)
"I do not like thee, Doctor Fell;
The reason why I cannot tell,
But this I know and know full well,
I do not like thee Doctor Fell"
The first impression means so much and I put great score by it,
In an instant we sense many things and no-one can deny it.
Does the expression seem off-key, and are the eyes too small?
Is the tone of voice, right at the start, causing your flesh to crawl?
Is the person too, too gushing; do you sense there's insincerity?
Do they wear lots of jewelry as a sign of their prosperity?
Or is it indefinable, the antipathy you feel?
Is it overpowering, though you doubt, yourself, it's real.
You just can't put your finger on that vague sense of unease,
While the newcomer in question is doing his best to please.
Your spouse says 'He's a nice chap' and yet you know he's not,
Yet you can't explain that lack of trust you know full-well you've got.
We all have heard of 'Doctor Fell' and the poet's verse confession;
He'd made his mind up in a trice from One Single First Impression.
*
Posted by Rinkly Rimes at 7:47 AM

I've been waiting for my red carpet treatment for years!