BLUE MONDAY
http://smilingsally.blogspot.com/2011/06/blue-monday-hospital-blues.html
And a special thought for Sally, who normally organises this Blog. She is in Intensive Care and her two grandaughters are looking after her blog for her.
BLUE SIMPLICITY
The art of Kobyashi Kaichi
What is it about these pictures
That proves so satisfying?
How can they make an impact
Without ever really trying?
So few colours, so few lines,
And devoid of facial features,
So few shadows, so few shapes,
And no other living creatures,
And yet I feel such sadness,
Such overwhelming pain,
When I view these little pictures,
Once and then again.
The terrible sense of waiting
For someone who never arrives.
A glimpse of something personal,
A glimpse of another's lives.

A woman sitting on the stairs.

By a lamp-post see her wait.

She passes by a flight of steps. 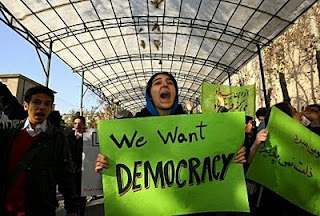 LOUD HAILER
I admire the sort of person who takes a stand and dares,
Dares to state an opinion about her world's affairs.
She looks an ordinary girl, not an exhibitionist,
But one so moved by the way things are that she dares to shake a fist!
Her placard's the green of the Irish, and the green of Iranians, too;
It stands for personal freedom, whatever the powerful do.
She dared to face a camera to get the result she craved.
But what has happened to her since? I hope she has been saved.
*
Posted by Rinkly Rimes at 7:31 AM

I find that second piece really thought provoking. I wonder if she's okay?