PAYING FOR PERFECTION
We envy them their stardom, their agility and grace;
We envy them their dazzling looks, both in form and face.
But, sometimes, there, behind the scenes, lurks sadness and distress.
Take this picture of Vera Ellen, in her glorious swirling dress.
Was there ever a better picture of movement, joy and light?
Was there any doubt that she would know a lifetime of delight?
Yet, I read in her biography that she had anorexia;
Her sylph-like shape was no accident, that's absolutely clear.
Her baby died of cot-death, and after that she withdrew
From public life altogether; she gave-up dancing too.
She died at the age of sixty, not even very old.
It seems her fairy-story was all too quickly told.
So, when you feel unnoticed and even a little bitter,
Remember that much of Hollywood lies beneath the surface glitter.
* 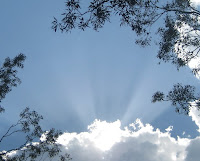 When I was a child in the Second World War,
Searchlights were often seen
Criss-crossing each other across the sky;
Part of the wartime scene.
They sought out the enemy droning in,
For bombs would soon be dropped.
They switched off after the planes had gone
And the battle-cries had stopped.
The beams of those lights were lovely,
Though they filled our hearts with dread;
And none of us liked to be woken
When we were asleep in bed.
Now I see such lights in the evening sky
When the day is nearly done.
I feel blessed to be able to watch the beams
From a beneficent sun.