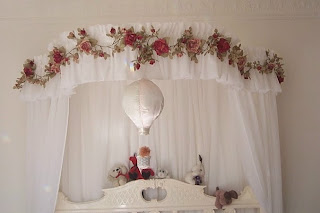 SWEET DREAMS
I visited a perfectionist four or five years ago!
His home was picture-perfect, with everything white as snow!
This shot is of the bedroom, but every room was the same,
With every sort of statuary that anyone could name!
There were angels, there were fairies, there were cupids by the score
And he even had a snow-white carpet lying on the floor!
It wasn't his wife who asked for it, though femininity ruled,
But visitors like us, 'Les Girls', positively drooled!
He'd plastered over the ceiling to resemble waves at sea;
White waves, of course, billowing across in neat virginity.
It was only an urban dwelling, fairly plain on the outside,
But that magic interior was ideal for a bride.
I couldn't have lived in that household, not being a perfect being,
And 'things' to dust and keep pristine were all that I kept seeing!
And I thought to myself what moving-house would ultimately entail!
It wasn't the sort of family home that would ever make a sale!
But just for a pleasant afternoon, with cream-cakes to the fore,
It was an experience.
Then I scuttled out the door!
*
Posted by Rinkly Rimes at 6:28 PM

That house must have been beautiful to visit - hopeless to live in.

Your microfiction poem got a laugh out of me. I've felt like that a time or two myself and would have liked to take a similar detour. LOL

The house in your second poem sounds like a museum, and I laughed when I read the line about dusting. That's just what I would see, too!

Good take on the photo-I was wondering if anyone would mention the stairs!
And the white house? Never-I can barely keep a white shirt from getting stained let alone a whole house!

I had a similar idea about the stairs, Brenda, but didn't go with it, and of course not in your signature rhyming style. Love it.
K