The effects of weightlessness.

I think it's extremely unlikely that I'll ever go up into Space.
For one thing, I'm happy here on Earth, a deliciously gorgeous place.
For another, I think it's a waste of time; some planets look unpleasant!
So, if I'm offered a passage I shall stay here, for the present.
Everything's far away too, too far for human travel
So we'll never get to the mysteries we are dying to unravel.
(I agree that in thousands and thousands of years this homeland of our birth,
This wonderful little accident we live on, this fair Earth,
May very well  become wasted and Mankind will have to flee,
But that's far in the future, say the year 5003!
But, by then, Mankind will be different, maybe unbelievably small,
So that each one can hide inside a tiny cell-sized ball.
Maybe a million can be shot-off, to float like dust, through Space,
Some of them landing on Planets just right for the human race!)
Maybe....... but no, I fantasise.........being silly, I confess,
But I know I'd hate that scary thing...... that silly weightlessness!
Imagine, floating around a room, not knowing which way is up,
And having to clamp things to tables..... a bottle, a platter, a cup!
As to one's toilet arrangements, they really sound obscene!
Lack of gravity presents a problem, if you know what I mean!
No! Don't decide to put me right and write with an explanation;
It's bad enough to be 'gifted' with a vivid imagination!
I can gaze up at the night-sky and glory in it all
But I'm much too large to be shot-off in a little cell-sized ball!
And I refuse, quite vehemently, to lose my sense of weight!
Downside, upside, sideside to! Too awful to contemplate!
*
-------------------------------------------------------------------- 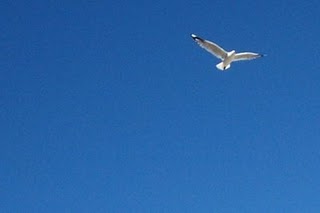 If I were religious, which I'm not,
I'd see my soul as a little dot
Seagull-shaped and in the blue
When all my life had been lived through.
Such fantasies are quite compelling
Such stories make delightful telling.
But since I doubt such things can be
A dreamless sleep is enough for me.
*
Posted by Rinkly Rimes at 7:00 AM

I love the title of this poem, and the fact that you appear to be more than happy to stay here on planet earth.

I agree with you! I'd rather be a cave dweller than a space traveller. Thanks for your wonderful contribution,
Wil, ABC Team

I LOVE this rhyme. I'd rather know which way is UP too.

What an Über great poem♫♪