POETS UNITED
http://poetryblogroll.blogspot.com.au/
asks us to play with an old fairy-tale

TOPSY-TURVY
Bertha was an ugly lady with a daughter twice as bad.
She'd inherited the worst bits of her mother and her dad.
Her nose was long and pointy, with a pimple on the end;
Her teeth were too black and broken for any dentist to mend.
Her feet were flat and smelly; her bosom hung quite low;
She'd been offered to some suitors but every one said 'No!'
This vision of girlish beauty was known as Ermintrude.
Not only was she ugly but her turn of phrase was crude!
*
Bertha went down to the local pub for a little tipple one night.
She'd put on all her glad-rags but still she looked a fright.
Sadly, a charming gentleman had had too much to drink
And the glasses through which he viewed her were definitely pink!
'Come up and see me sometime' Mum said suggestively,
And the charming gentleman hiccupped and said 'Toodle-oo! Yippee!'
*
Alas, he woke next morning lying next to a nightmare face;
He was covered in confusion, and aware of his disgrace.
'You must make an honest woman of me' cried Bertha with intent,
Feeling that Jim, the gentleman, was something heaven-sent.
Jim ( he was known as Gentleman Jim) agreed to pay the price
And he said he'd marry her, for sure, against his friends' advice.
'I'll be bringing my sweet twin daughters to live with us as well'
Said Gentleman Jim before, aghast, he crept back in his shell.
Bertha didn't turn a hair; she was needing some more staff.
The thought of two extra servants brought forth a cruel laugh.
*
After the sumptuous wedding, Jim's daughters both moved-in.
(And don't forget that Ermintrude was twice as ugly as sin!)
Rose and Petal were beautiful, with skin like peaches and cream;
Their eyes shone like the pebbles at the bottom of a mountain stream.
Their waists were small and delicate; their voices soft and sweet;
And smelling of barley-water were their pretty little feet.
Bertha took one look at them and sent them both downstairs.
'I can't have silly little upstarts putting on any airs!'
She took away their pretty clothes and replaced them with old rags,
Trying to make the lovely girls look like decrepit hags.
But could she? No! Their beauty shone forth like the morning star.
As for Ermintrude she looked even more below par.
*
However, she was invited to a barn-dance at the Palace
And she told the twins of her good luck with more than a hint of malice.
'You two must help me get ready! I really must look my best!
The Prince is looking for a lady and I want him to be impressed!'
Well, they couldn't do much with her, with all her lumps and bumps,
But she soon set-off for the palace, wearing her dancing pumps.
No sooner had she departed than a fairy, Tinker Bell,
Swooped into the kitchen to cast a fairy spell.
'Double magic!' cried the fairy as she fluttered in the door;
'My magic will be diluted. I've never 'done' twins before!
One can have the pretty dress, and one the pretty shoes!
But the coach I'll be supplying is of a size that two can use.
You're going to the Barn Dance. You won't look too crash hot,
But sadly, one pretty outfit is all that I have got.
Off you go, my darlings, and have a lot of fun,
But do make sure you get back here by the time the clock strikes one!'
*
So off they went to the Barn Dance, looking pretty tacky, I guess,
But, fortunately, the other guests were wearing fancy dress.
No-one noticed their odd garb, only their glorious faces
And all their quite delicious curves in all the nicest places.
The Prince was quite besotted; he danced with them all night
While Ermintrude stood, unwanted, her face suffused with spite.
First he'd dance with Petal, and then he'd dance with Rose,
First one and then the other, that was how he chose.
When the clock struck one they hastened home and returned to their former life,
Both of them fervently wishing they could be the Prince's wife.
Petal, the shoe-wearer, dropped both shoes on the floor!
And when the Prince found them lying there he shouted 'I adore
The girl these shoes belong to! I'll search both far and wide!
Though she may be a commoner, she will be my bride!'
*
When he arrived Chez Bertha, Ermintrude tried a shoe,
But though she tried her hardest her big feet wouldn't do.
'I'm aware of a lovely feminine scent drifting up from the servants' quarters!'
Declared the Prince. Said Gentleman Jim, 'That perfume is my twin daughters.'
Well, of course, when he looked at them and found both fitted the shoes
He was only to eager to announce his Princely news.
' I cannot choose between them!' he declared ' And, since I am loathe
To hurt either of these ladies,
I intend to marry them both!'
*
---------------------------------------------------------- 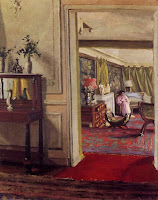 Vallotton
THE PINK DRESSING-GOWN
Underneath that old pink gown,
She's wearing her best scanties;
Little whisps of silk and lace,
The briefest bra and panties!
'Just relax while I mix my paints'
Mr Vallotton has said,
So she's donned the old pink dressing-gown
That was thrown across her bed.
She's got herself a cup of tea;
(The day is rather chilly
Not the sort of weather
For anything brief and frilly.)
And while she's sitting waiting,
She's imagining her pose;
Very sleek and sinuous
In hardly any clothes.
She pictures how she'll 'sit' for him,
Maybe draped across a chair.
Her shoulders should be delectable;
Voluptuous and bare.
She'll think of something sexy;
That should do the trick!
She'll probably get goose-pimples
If the artist isn't quick!
*
'Hurry up' she calls to the artist;
'Waiting here is not much fun!'
'Relax!' calls Mr Vallotton
'The painting's already done!'
*
Posted by Rinkly Rimes at 3:47 PM

Double top! My preference is for the verse, but both are mightily impressive. Excellent post and a perfect response to the challenge set.

That was fun! Loved the ending! That will shake up the royals. Tee hee.

Awesome! I loved both of these very much!

I will always think of your words, when I next read Cinderella. Your poetic tale was by far the most amusing:)

Very clever!! We were both on the same page in the first inspiration
The second made me laugh out loud --love it!

I so enjoyed your clever take on the original...so fun to read! Love that you added so many clever spin offs~
Well Done :D