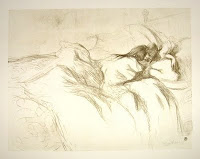 Raymond came home from work one day not expecting any stress,
To be greeted by chaos everywhere, nothing but a mess.
The driveway was littered with children's toys, and bits of this and that,
A half-eaten apple-core was lying there right on the 'Welcome' mat.
When he went inside, he got a shock, there were grubby clothes wall to wall,
As well as more toys......a bike, a doll, a kite and a tennis-ball!
In the kitchen the sink was piled up high with dirty dishes and bowls
While on the table a platter stood filled with un-baked sausage-rolls.
He went upstairs to the bathroom, wet towels were everywhere,
The floor was full of puddles; he could only stand and stare.
Suddenly, he felt quite nervous! Had his dear wife fallen ill?
'Darling?' he called out nervously, his voice sounding rather shrill.
Silence greeted his shouting; maybe his wife was dead!
He rushed into the bedroom......she was lying there in bed!
She turned and, stretching lazily, she smiled her broadest smile
Saying 'Don't you worry, sweetheart, I was up here all the while.
But you know how you always ask me what I've been doing all day.....
Well, today I didn't do it!
I'd like supper on a tray.'
*
-----------------------------------------------------------------
PS
In case I've ever given my overseas readers the idea that Australia basks in 100% sunshine, this photo will put the matter to rest. Number 13 is my grandson, Blake, playing soccer yesterday. Oh well, it is winter, after all. And Number 13 wasn't unlucky....Blake's team won.
* 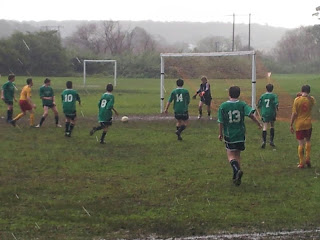 Thanks so much for your fun contribution to this week's Limerick-Off. And your second poem is hilarious!