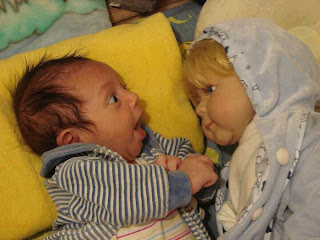 He was a Hillbilly father, in town with his little son;
Neither of them had much idea how city things were done.
They chanced upon an elevator and the boy said 'Dad,
I've never seen a thing like that! Are you sure it isn't bad?'
The father said 'To find out we'll keep watch on the door.
We'll wait until it opens up then we'll know much more.'
A portly lady ambled up; she was old, her hair was grey.
She pressed the button marked as 'UP' in a very casual way.
She went inside; the door was closed. The father was perplexed.
He said 'I can't imagine what's going to happen next.'
Well, after a while the elevator came back, again, to the ground.
And father and son stood watching with eyes all big and round.
The door slid open and  my goodness, what a great surprise!
A beautiful luscious blonde appeared right before their eyes!
She was young and sweet and pretty and only about eighteen!
She'd gone in as a Granny and come out as a Movie Queen!
Father and son were astounded. Open-mouthed they looked at each other!
Then Dad said 'Run to our hotel room!
I want you to fetch your mother!'
*
Posted by Rinkly Rimes at 8:53 AM

LOL i love the expression on the baby's face!

Haha. Love the first photo. Have a fabulous week.

sometimes laughter can be inappropriate, but I am unable to stop .... I once laughed out loud while talking at a wake, and the looks I got could have killed a lesser person! both rhymes were fun-espec. the hillbilly's elevator ...

The baby was very surprised! So cute..

Visiting for MYM- hope you can stop by..