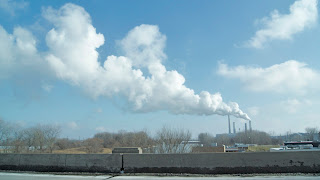 STEAM DREAM
Wishing idly, as in a dream,
I wished all smoke were turned to steam.
Steam from chimneys gets the blame,
But smoke and steam are not the same.
Steam is seen on the television,
Belching forth! But our derision
Is uncalled for. Steam, on high,
Goes off into the azure sky,
Hangs all puffy as clouds do,
Then fades away into the blue.
Smoke, on the other hand, hangs about
And it's something we can do without!
It's dirty, polluting and unpleasant,
And a great threat at the present.
Climate Change is just no joke
And much of it is caused by smoke.
But TV presenters like to show
Factory chimneys for they know
Belching chimneys demonstrate
Smoke pollution, which we hate.
Belching smoke? That is a sin,
But, viewers, don't be taken in....
Steam is pretty, steam is good.
Turn smoke to steam? I wish we could.
The scene above shows no pollution.
Swap smoke for steam.
There's a solution.
*
------------------------------------------------------------------------------

THE LITTLE MATTER OF ETERNITY
So you fancy living for ever........ well, doesn't everyone?
We hate the thought that our little lives will be suddenly be done.
There are some who believe we never die, but float around somewhere,
In some sort of improved life way up in the sky.
I don't subscribe to this theory, and I ask those with these views
' If you'll be one age for eternity, which age will you choose?'
Babyhood may look very cute, but there is no denying
That 'forever', as one, would be rather dull........ all that dribbling and crying!
And would you like to be a teen, with all that that entails;
All that body-image angst, all that teetering on the scales?
How about all eternity as someone of middle age?
I've yet to hear anybody say that that's the perfect stage!
As to being, for ever, all elderly and tottery......
That doesn't strike me as much of a prize for winning the final lottery!
And so I'm sure that you will say you'd like to be twenty-one,
Now that's something to look forward to when your days on earth are done.
But wait! What about your children? They're not yet on the scene!
You'll have to go through eternity as though they had never been!
The whole thing's rather complicated. I can't make up my mind.
I think I'll just turn out the light when I leave this life behind!
*
Posted by Rinkly Rimes at 9:10 AM

Some chimneys blow smoke, some blow steam - it's hard to tell the difference on a cold winter morning, when both carry so far.

I like both of these.....so is that steam or smoke and how do you tell?

well that Steam Dream poetry is quite the answer isn't it? I live near to power-stations, and so many see them and detest them, but they don't mind the electricity! Catch-22?