Hanging Off a Cliff! 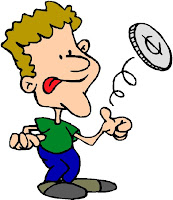 FLIP!
Onamatapoeia! It plays such clever tricks!
By it our use of language is enriched.
We've been creating 'sound-like' words ever since the dawn of time,
And very, very few are ever ditched.
*
Take 'Crash' and 'Bang' and 'Plop' and 'Zoom',
Take 'Sizzle', 'Sniff' and 'Gurgle', 'Whack' and 'Screech'!
Such words are so descriptive, such inventions of the tongue,
Such wondeful embellishments of speech!
*
And 'Flip' is a great example! It really says it all!
Hear the coin as it's tossed and then it's turned!
Well, that's all for today, folks! I know you'll all say 'Wow!'
When you realise a lesson has been learned!
*
Posted by Rinkly Rimes at 5:54 PM