MELLOW YELLOW
http://mellowyellowmonday.blogspot.com
JUST JESTING
When would you wear shoes like these?
(If you wore them at all!)
Maybe in a Fashion Show
Or at a Fancy Dress Ball.
They don't look very comfortable,
But they'd certainly cause a stir.
( A brand of shoe called a 'Hush Puppy'
Is something I'd prefer.)
I think they're really clever;
I particularly like the heel,
But I have a very strong feeling that
They'd make my bunions squeal!
I'm reminded of Court Jesters;
They, too, wore 'curly' shoes
Cavorting round the banqueting hall
And proclaiming humorous views.
Shoes shaped like bananas!
There's a comical wheeze.
But if I wore these shoes on my feet
I'd soon crash to my knees.
*
------------------------------------------------------------------
BLOG!
I've always longed to swear but been too scared to,
I've longed to spit and snarl but never dared to.
Though I've been consumed with wrath
Like some elemental Goth
To lose my gentle image I've not cared to.
But I've become a Blogger only lately,
I'm no longer calm and ladylike and stately.
If I'm bitten by a dog
I scream 'Blog! You Blogging Blog!'
My frustrations have all gone, quite consumately!
So, all you Bloggers, learn to swear unfettered
For BLOG's a word that simply can't be bettered;
It's explosive, it has punch
And I've got a kind of hunch
That it sounds like something worse to the unlettered!
Don't offer any grovelling apology
You haven't voiced some hint of rude biology.
And they'll never hear you utter
Those expletives from the gutter.
Now I'll close before I eat my own tautology!
*
---------------------------------------------------------------------------
PS

I have my two youngest grandsons for individual lessons on Sundays now. We're no longer going to be picking them up at school during the week, so seeing them on Sundays instead will be great. After the lessons yesterday we went over to the park next-door for Harry to try out his new (larger) bike and Max to try out his new sports shoes. They both took it all quite seriously! 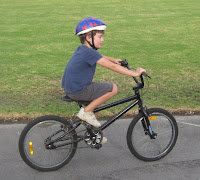 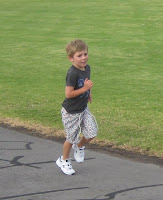 I look with reverence at those curly yellow shoes.... It's the one our movie heroes wear along with green shirts and red colour trousers.!!!!

Harry & Max do indeed look pretty serious and excited in trying out their new skills and accessories.

Always so happy to see Harry and Max, Brenda. Enjoy them while you can. One day they'll be teenagers and won't think grandmothers are fun. Then they'll get over it, of course. It's a phase that lasts about a year, apparently.
The banana shoes are so funny, but my orthotic insoles (for falling arches) wouldn't fit in them.
And I love your swearing advice. I should try to remember that. My mother used to say "Horsefeathers!" and if she were very angry, she'd say "Hell's bells and buckets of blood." I think you and Mom would have liked one another.
K

You always have a great post. Visiting from MYM!

beautiful shots, great pictures, liked them all :-) visiting from Mellow Yellow Monday, hope that you can return the visit too.

I wore a flip flop and went for a long walk today. My toes are hurting.
May be I should have worn a pair of banana shoes.