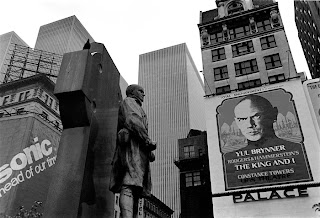 MAGPIE TALES
http://magpietales.blogspot.com
supplied the prompt
THE RIVALS
By day they gazed out silently,
Both being where they ought to be;
One, in bronze, full length, erect,
The other with a gaze direct.
Lenin and Yul, both widely famed,
Both men whom Mother Russia claimed.
Immobile, through the sunlit days,
Both with an unmoving gaze.
But when the secret night fell down
And all was hushed about the town,
The arguments would always start;
It was hard to keep the two apart!
'A poster, showing your photograph!
Yul, old man, don't make me laugh!
You can be ripped down in a flash;
A poster's ephemeral and brash.
I, on the other hand, stand tall;
Not a mere picture on a wall.
I'm made of metal; I'll last for ever.
You are stupid and I am clever'
Then Yul would start his dissertation
Regarding his rival situation.
'Lenin, old chap, your days are over!
And, you must face the fact, moreover,
That there is only one of you
In this city. That's very few.
Whereas, my face is everywhere!
When people see it they declare
'Let us see him on the screen tonight'.
I'm more famous than you, all right!'
Nobody heard these conversations;
Nobody guessed at strained relations.
The sun came up and all seemed well.
But, oh, what a tale the two could tell!
*
-------------------------------------------------------------------------------

BINGO!
(Written when we were asked to use a list of related words)
My mind was thin and frugal
So I made a stab at Google
To get a list of words that I could rhyme.
I'd been told to use a list,
And I said 'If you insist';
It seemed a little tricky at the time.
I found a site called 'Bingo'
Which had a way with lingo,
Creating lists for bingo games in schools.
For the topic I chose 'Climate';
If I found a word I'd rhyme it;
It seemed a game without too many rules!
*
So here goes! I'll have a try.....
I see 'wet' and I see 'dry',
I see 'humid', and a reference to 'snow';
I see 'desert' I see 'grass'
I see 'frost' that shines like glass,
I see 'muggy' when we'd like a breeze to blow.
I see 'permafrost' that will stay
For ever and a day;
I see 'tropical' a glimpse of Paradise.
I see 'tundra', rather bleak,
And not a place I'd seek;
I see 'steppes' the site of freezing snow and ice.
'Semiarid' I must say
Says to me 'Best stay away'.
But 'savannas' sound enticing in a way.
'Subtropical'? Sounds good
And, clearly, so it should,
That's the climate that I'm living in today.
*
There are some that I have missed
In this Bingo Climate List,
And my verses are the opposite of lyrical.
But the fact that I could trawl
And find anything at all
Was, to say the least, an unexpected miracle!
*
Posted by Rinkly Rimes at 4:28 PM

A fun exercise in rhyming. :) But I'm more a rhymezone kinda gal. :)

ha i imagine that they could tell a tale...love the one ups manship in their convo...fun read...

Bingo! You hit the jackpot with these!

i just love the tongue in cheek, esp the poster -> it's a new york billboard on times square!! i lvoe it.

If only pigeons could talk...