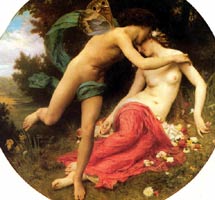 
ZEPHYR
(God of the West Wind.)
Zephyr had a way with him, there's just no doubt about it.
If he saw a lady in a dress he coaxed her to do without it!
Of course, he was a god and so the rules did not apply,
And what was a randy god to do if a lady acted shy?
It seems he controlled the breezes so they didn't quite reveal
The little nooks and crannies even gods have to conceal.
* 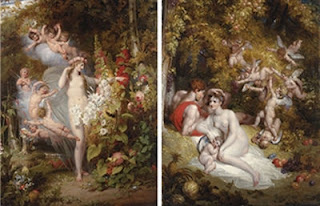 *
It also seems had a little gang of 'likely lads'
Who were much too young to be complete and unmitigated cads!
They just did Zephyr's bidding, fluttering here and there,
Tantalising the onlooker with their little puffs of air!
They were innocent, of course, but Zephyr was a lecher,
Hiding in the bushes and taking a peep, I betcha!
*

*
Sometimes he was successful, snatching girls up to the sky,
Though their gauzy costumes stayed intact even way, way, way up high.
Life must have been exciting in those mythical bygone days.
The words 'swept of my feet' was not an ordinary phrase.
Sometimes the ladies quibbled and pretended to say 'No'
But look at this girl's expression! And what a handsome beau!
*

*
In the illustration seen below there's a touch of fairyland;
With pretty little nosegays scattered all across the land.
The wispy cloth's still evident, though milady just makes do
With a garland made of flowers, doing what they have to do.
When she sees her friend tomorrow I know what she'll say....
'I met this gorgeous fella and he just blew me away!'
*

*
And , finally, there's my favourite! Without the slightest fuss
He smoothly carries her along like riding in a bus!
She's quite demurely clad I see, with her skirt in the proper place,
But he's brought along a trailing sort of bed-sheet just in case!
His wings look rather fragile for the lifting he must do!
I wouldn't trust myself to him while sailing in the blue!
* 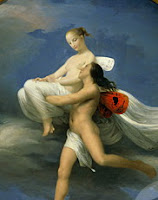 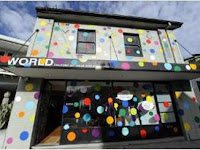 
SPOT THE SHOP!
I spotted this shop (forgive the pun)
When I was in town one day.
I thought it looked so cheerful
In a happy, childish way.
The other shops that were in the street
Looked drab in the extreme,
While this spotted shop had a sort of charm
With its polka-dotted theme.
I was hoping to pass it another day,
But that was not to be.
The Sydney City Fathers
Decided we should not see
That jolly, extrovert shop-front!
They had to clean-up their act!
At times like these Town Councils
All deserve to be sacked!
*
Posted by Rinkly Rimes at 7:41 AM

I am falling around laughing, Brenda! Must get out to more art galleries.

Where were you when I needed to learn mythology in school???
Me thinks I would have remembered the facts better if your poems had been around.

What a delightful album of Zephyr's many moods!
Word of the day for me: polka dots

I had such a fun visit to your blog today.

Such a colorful shop!

Zodiac is one of my entries. Come see it when you get a chance. Thanks!

Nice painting...but I kept thinking of the "Zepher" in the funny movie Day and Knight!!!

loving the mythology - what a great entry to finish with
http://jobryantnz.wordpress.com/2012/01/15/z-is-for-zinke/