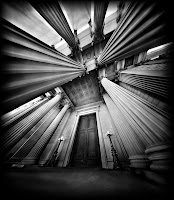 Scott Speck
IT'S THURSDAY
http://talesthursday.blogspot.com
supplied the prompt
ALICE
The things we learned as children stay with us through the years,
And my idea of 'Wonderland' frequently appears
Behind my eyes, as I seek for sleep or in the morning, waking,
And ridding my head of old, old dreams is quite an undertaking.
How odd to see, as Alice did, one's body getting smaller;
How strange to feel things shrinking and one's body growing taller!
I was quite unmoved I think by thoughts of the Mad Hatter,
And all that playing-card royalty didn't really very much matter.
But Alice's changing dimensions really caught my imagination
And I would often picture myself in the self-same situation.
The matter of Size still intrigues me. I consider the size of a house
And how enormous it must look to a tiny little mouse!
I also consider the universe, and think it could be small,
We could all be specks of dust on a giant's bouncing ball!
Lewis Carroll's quirky thoughts have entered in my head
Even though 'Alice in Wonderland' was just a book I read.
*
---------------------------------------------------------------------------------------------

THIN ICE!
'One final pose before we go!
Off with our skates out in the snow!
Three sisters, ready for the fray.
(What a very apt phrase to say!)
Maudie speaking; that is me,
In the centre, where I should be.
For I'm the eldest. There was no boy,
So I was my parents' pride and joy.
Rose to my right; the other one's Dora;
The one with the slightly different aura.
Rose and I! Such friends we'd been!
Until that Dora came between.
The baby! The favourite! The parents' pet!
"Such a pretty baby!" (I can hear them yet!)
Right from the start she spoiled our fun!
Dora was the unwanted one.
"Take Dora with you!" Mama would say
Whenever we two went out to play.
The wretched creature used to bawl........
Then, "Don't forget Dora! She's only small!"
Rose and I, for years and years,
Have suffered from Dora's silly tears!
But now we're grown; we both have beaux;
Childhood was bad enough, goodness knows!
Percy and George have begun to complain.....
"Not that Dora! Not again!"
Mama is pleased with us today!
She didn't even need to say
"Take Dora with you!"...... for we have chosen
To skate on the pond where the ice is frozen.
We know a spot where the ice is thin!
We'll hold her down when we've pushed her in!
*
Posted by Rinkly Rimes at 11:42 AM