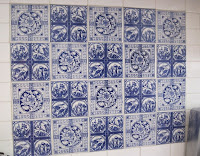 The tiles in my son's kitchen
MOODY BLUES
Sometimes I'm drawn to symmetry; sometimes I like a riot,
A scene of crazy dissonance, a dazzle of unquiet.
Sometimes it gives me pleasure when patterns stand in line;
Sometimes a whirligig of hues seems absolutely fine.
I wonder if psychologists consider this attraction;
These quite opposing decorations giving satisfaction.
I'm feeling rather low today so is that why I choose
These tiles? Is there security in these, my Moody Blues?
*
Posted by Rinkly Rimes at 6:28 AM

LOL...Love the Moody Blues poem...BTW...I call my blog Ann's Moody Blues, because sometimes I can be quite Moody.

like a BREATH of fresh air!
ROG, ABC Wednesday team

Utterly delightful.
Such a thought...a boa constrictor around my neck.

Whatever the case, they wore it all the same !!

Ah, the fateful feather boa...of course it must have been named by a misogynist, Brenda. How brilliant of you to figure it out!
The blue tiles, however, look quite cheerful to me, like something from Delft, or a sky with a small smattering of cloud.
K