Patterns on the Ceiling

PATTERNS ON THE CEILING

A very different picture and yet it brought back memories
Of a very different childhood long ago,
When I lived in a colder climate where winters lasted long,
And the air was often full of sleet and snow.......
*
I'd never heard of Andrew Wyeth and his 'Big Room' work of art,
So I looked them up on Google (as you do),
And I read that he was sickly as a child and spent his time
In his bedroom, with the four walls as a view.
He didn't go to school and so he had a narrow life,
With a member of his family as teacher.

Later, when he was painting, he recalled his childhood days
And the fire in the fireplace was a feature.
* 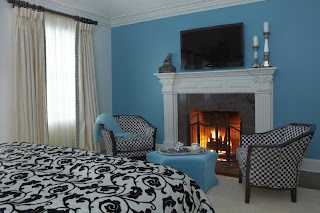 My own bedroom wasn't this grand.

And, suddenly all in a rush, I remembered my own youth,
Spent in another time, another place,
And I recalled a bedroom and a lovely cosy bed
With a fire crackling in the fire-place.
It must have been a novelty; I recall it as a treat;
I think I was unwell, confined to bed.
Did I have the measles? Or did I have the mumps?
Or was it, maybe, the chicken-pox instead?
All I know is I lay in bed, cosy as I could be,
All through the day and on into the night,
And the fire in the fireplace crackled and then flared
And, as daylight went, the fire grew more bright.
My light turned off, I lay in bed gazing up at the ceiling,
Where firelight patterns flickered, dancing gold,
And I found it quite entrancing, it was 'just like fairyland',
Reminding me of stories I'd been told.
I don't remember sickness, only comfort and delight,
With the blankets pulled right up to reach my nose,
And my eyes upon the dancing shapes performing just for me,
And warmth that reached right down into my toes.
*
Thank you Mr Wyeth, and thank you Google too!
That memory was buried very deep.
Such memories sustain us and it's good when they're recalled.
Flames and crackling and patterns...........and then sleep.
*
--------------------------------------------------------------

PLEASURE!﻿
(Written a couple of years ago!)

It gave them so much pleasure
Discovering Sub-Prime!
The Bankers bloomed and blossomed
With ecstasy at the time.
They borrowed, lent and borrowed,
And the web spread far and wide.
Everyone could own a home!
Nobody was denied!
Oh the pleasure of the dealings!
The rubbing of the hands!
The syphoning of money
From other distant lands!
Then, one borrower defaulted!
The scheme had a nasty smell!
Then another and another!
Like dominoes they fell!
Does it give the bankers pleasure now,
To see their land laid low;
To see the assets dwindling
Where once they used to grow!
'Pride comes before a fall' they say.
And 'Look before you leap!'
Too late for little sayings!
The whole thing's gone too deep.
And all of us were guilty
Very guilty indeed;
What we mistook for pleasure
Was simply boundless greed.
*

Enchanting recounting of your memories ... exactly what a good prompt is meant to do!

Nice revery. I too remember the luxury of a fire in my bedroom when I was ill. Our house was Victorian and had a fireplace in every room.

Thanks for the lovely stream of consciousness, and for the research...a wonderful reverie..and a fireplace in your bedroom! Lucky girl!!

I'm ready for a winter that lasts long...

Oh great post, both of them. I so enjoyed your google spot, yes I do the same, although after reading his version of life and the possible reasons for his painting of this, I took a deeper look at his painting and felt possibly a tiny tad of him, but something much deeper even....I just love the Mag!

oh delightful
what a nice memory that was jarred loose
Wyeth painted a wonderful warm
room....revealing much of himself

I love winter and the warmth of the great inside - love your poems too.