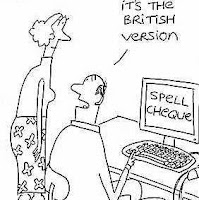 POETIC BLOOMINGS
http://poeticbloomings.com/
asks us to write about a success
Mine was a near-miss.

I felt THAT close to real success,
But it all ended in something less........
All throughout my teaching career
I'd held something very dear,
In fact it almost became an obsession,
When I was part of the teaching profession.
I'd seen so many students falter,
Sacrificed on the SPELLING altar,
That I devised my own little scheme,
Which became a passionate dream.
I devised a system purely phonic,
Which swept through my class like a magic tonic.
Five year-olds who are always fighting
With spelling rules when they are writing
Soon lose heart; it's all too hard.
And their creativity's marred.
Once my children felt free to express their minds
In stories and news of various kinds,
Then I gradually brought-in 'rules',
Such as are common in primary schools.
(I hated to do it because I'm sure
Spelling will one day go out the door
For all and sundry. But not in my time.
A world without spelling! How sublime!)
Anyway, I had a lot of success;
I wrote a book and it went to press.
I still earn royalties to this day,
So sometimes the written word can pay!
The Premier came and shook my hand
And he seemed to understand.
But there it all ended! It fizzled out!
But I was THAT close, without a doubt.
*
-------------------------------------------------------------------------

Take heed, all you salacious ones, pornographers take heed!
Here is sex triumphant, without doubt.
Here is represented the essence of 'the act'
But it murmurs; it doesn't need to shout.
This was painted by a man, yet it captures with such ease,
The way the female feels about romance.
No crudity, no over-kill, no 'in-yer-face' approach.
There is no leer; it's tender as a glance.
We know there are raunchy women, who tend to think like men,
Who like to be 'out-there' and having 'fun'.
'Good luck to them', I say, but there are many, many  more
Who prefer the woman to be wooed and won.
This painting's called 'The Kiss'  but it's so much more than that;
It stirs, inside us all, some ancient need.
'Romance' is a flowery flimsy thing that some may disregard.
But, for a joyful love-life,  just take heed!
*

WOW! Good for you, Rimes! I'd love to see your book. Is it still in print? Thanks so much for helping "our" kids out there.