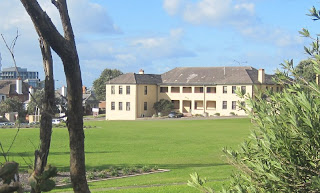 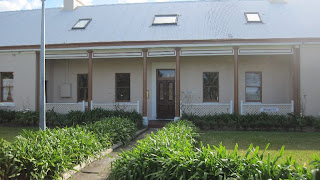 Australia's history is short, compared with the UK,
Where ancient buildings were the norm, almost 'everyday'.
The church I went to in my youth had parts immensely old;
Built a thousand years ago, and precious beyond gold.
And yet I hardly noticed them, they were a 'background noise',
They weren't the subject we discussed with the choir boys!
Of course the Aborigines have a history that's vast
But the European settlement is not far in the past.
But these are 'ancient' buildings in Newcastle, my town,
And there's a very real danger that they may be knocked down.
I went to a lecture recently and heard their history;
I found myself viewing their demise with a certain sympathy.
First they housed the military, back in the convict days;
Then they housed 'difficult ladies' who refused to change their ways.
Later on they became an asylum, where imbeciles received care;
The inmates tended the gardens while they were staying there.
The Commandant's Cottage, the lower view, is now a small cafe,
And it was there we were lectured to, only the other day.
Compared with the Sphinx of Egypt, or even the Taj Mahal,
Our convict-built little buildings are really quite banal.
But I'd hate to see them disappear, maybe to be replaced
By a soulless block of offices, built without too much taste.
Sadly, they sit unoccupied, on a piece of Real Estate,
From which the view of the Ocean is absolutely great.
Let's keep our fingers crossed that they may possibly survive.
It's good to remember History and keep memories alive.
*
----------------------------------------------------------------------------------------- 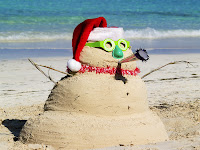 HOW I INVENTED XMAS IN JULY.﻿

Cast your mind back over the years
To when this festival appears.
In the nineteen-seventies, it seems to me,
I created this jollity.
Till then, July would pass un-sung,
All the other months among.
Since the month is rather chilly,
Celebrating July seemed rather silly.
July was as far as it could be
From Xmas Time. You must agree.
Although we sweltered on Xmas Day,
Things would always stay that way.
We'd down the turkey and plum pud
Convincing ourselves that it was good
To eat while temperatures would climb.
After, all, it was Xmas Time.
As a Pom, I found it strange,
But I was quite prepared to change.
Immigrants have to change their ways
And I'm the type that always obeys.
So several Christmases went by,
With the temperature very high
And me reduced to a small grease-spot.
After all, that was my lot.
Picture me, the submissive cook,
Knowing I couldn't get off the hook.
Now Malcolm and I had elderly mothers,
And we had no sisters, had no brothers,
So we were carers for many years.
(Does this tale reduce you to tears?)
Now on this certain December date
Both mothers were with us. Such is fate.
The weather forecast predicted heat,
And I, the cook, began to bleat...
'Surely you don't expect a hot meal!
Turkey? Plum pudding? How unreal!'
But the Mothers looked at me aghast,
Each aware of her English past.
'Goodness, Brenda! What a suggestion!
A cold meal? We'd have indigestion
If we didn't have the traditional fare!
It's something neither of us could bear!
Think of the meals we've cooked for you
Over the years! Now we are due
A right royal feast on Xmas Day!
You can't wriggle out of things that way!'
So I was trapped; I had no choice!
Ethel and Win spoke with one voice!
Xmas Day dawned hot, hot, hot.
Over 100 degrees it got!
I was in the kitchen, toiling,
In more than one way my blood was boiling!
I produced a meal that was delicious
Giving-in to the mothers' wishes.
Lunchtime came, the temperature climbed,
Being very badly timed.
The temperature climbed to one hundred and four.
I felt I couldn't take much more!
'Up to the table!' my voice rang out,
In a slightly churlish way, no doubt.
In paper hats we sat at the table;
Me smiling as much as I was able.
I served the food; it looked divine.
We may even have had a glass of wine.
The mothers weighed-in with a will,
But soon they started to look quite ill!
'Whatever's the matter?' I was perplexed.
What was going to happen next?
They picked at their food looking so downcast!
My beautiful food, my great repast!
'I'm sorry, dear' one ventured to say,
'But it's really much too hot today.
I just can't swallow another bite.
Maybe I'll try a little tonight.'
I can't remember what I said
But I do remember that I saw red!
And I do recall that I had my say.
'No more hot food on Xmas Day!
But I promise that, when there's winter weather
We'll enjoy a Xmas feast together.
When the temperature is low, not high,
We'll have our Xmas in July'.
Well, July came and I kept my word,
Though our children said it was absurd.
'Xmas in July!' they hooted,
When my little idea was mooted.
'You can ask some friends' I then suggested,
And that's when my patience was sorely tested!
'We'd be ashamed' they said to each other
'To confess that we had a peculiar mother!
We'll keep it secret. It's too bad
That our mother has gone completely mad!'
But we had our feast, the neighbours came,
They all took part in my silly game;
We had a good time as I recall,
With paper hats, and carols and all.
The children winced (they were in their teens,
And everyone here knows what that means.)
But all agreed it was a great success;
My bit of July silliness.
However, a well-known Terrigal Hotel
Offered Xmas in July as well,
The very next year! How about that!
Part of the year which had been flat
Now became a festival
Enjoyed and marked by one and all!
It's now become almost world-wide
Our own cold-weather Xmastide!
I've no proof it was my invention.
But its certainly my contention
That my domestic situation
Brought forth this yearly celebration!
Nobody here is allowed to deny
That I invented
Xmas in July!
*


This untimely Christmas festival is often ascribed to a group of Irish tourists who went for a vacation in Sydney's Blue Mountains in the summer months of July in 1980. Away from the summer temperatures in their country, they were overjoyed at the sight of snow there. It is believed that they convinced the proprietor of a local hotel in the Blue Mountains in New South Wales to hold a party called "Yulefest". The idea was an instant hit and caught on the imagination of everyone present there. The proprietor saw a golden opportunity in this and henceforth held a Christmas Party each year in July.