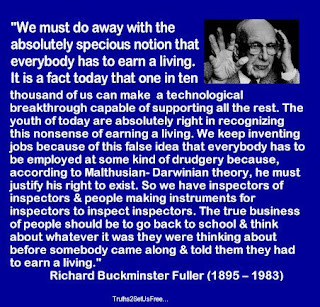 Idealism at its most ideal.
Some would say utterly unreal.
And yet this long verbal recital
Does say something really vital.
Progress is worshipped far and wide
As though this old world can provide
More and more for more and more.
Was that what it was created for?
I pay you and you pay me;
Money circling eternally.
Everyone must have employment.
Whatever happened to enjoyment?
Some love to work. Well, let them do it.
They think that there is nothing to it.
But other people like to dream,
Not get involved in a get-rich scheme.
Why can't the poor Greeks be applauded,
Congratulated and, yes, lauded?
They have the sun and the olive trees,
And other delights designed to please.
All they need is their daily bread.
Why can't they get that into their head?
The Germans are made of sterner stuff;
They very rarely run out of puff.
Their national product gets bigger, bigger,
Rising to an enormous figure.
But if they carry on that way
They will, possibly, rue the day
When work for work's sake rules the land
And nothing goes quite as they planned.
They'll reach a time when there's no more money......
And Germany isn't all that sunny.
They'll envy the Greeks who take their ease
Lying beneath the olive trees.
Buckminster Fuller, clever old chap,
Says 'Greeks! Don't fall into that trap!
What matters it if your coffers shrink?
Lie in the sun, my friends, and........think'.
*
---------------------------------------------------------------------

Angeline was an awful prude,
She never showed her skin.
She was always covered from head to foot
And was very aware of sin.
Her mother had said she must keep herself
Away from the common gaze;
'Ladies' she'd said ' Are fully-clothed
And always wear their stays.'
Angelina was well-behaved
And did as she was told,
And throughout the years of her girlhood
She was as good as gold.
However, her beauty was so great
That the men became aware
And fantasised about the body
That lay under the outerwear.
On her eighteenth birthday
She received gifts galore.
Most of them were ordinary,
Bought from the local store.
But Ben Balonky gave her a bike
With a little silver bell.
But he thought he wouldn't tell her
That the bike was under a spell.
'It's called 'The Lady Godiva'
Said Ben, with obvious pride;
'Why don't you jump on it right now
And go for a little ride?'
Excitedly Angeline mounted
Fully clad, of course,
And the magic made her fantasise
That she was riding a horse!
Off came her thick wool stockings!
Off came her blouse and stays!
Very soon her nudity
Was revealed to the public gaze!
'Tally Ho!' shouted Angeline
'This is the life for me!
Mother! You didn't tell me
About the joys of nudity!'
What happened to Angeline after that
The history books don't teach,
But I bet that she spent her holidays
On the nearest Nudist Beach!
*