They call you a Common Noddy and it's true you're not a star;
You don't fly in the mountains up where the eagles are.
Your colours are not startling; you have a curious name.
In fact you don't do anything entitling you to fame!
But you are very devoted to the single egg you lay
And sometimes food and sustenance are very far away.
The little lady Noddy sits patiently on the nest,
Living in hope that her faithful mate will do his very best
To bring back food to sustain her as she just sits and waits.
This is the way of many birds devoted to their mates.
The male does not object when he is sent to look for food,
But sometimes the little female falls into a morbid mood.
'Will he return? Will he neglect me? In the long night I despair.
I long to look up in the sky and see him fluttering there.'
And sure enough, in the morning, he's back in her embrace,
Being given a welcome that shames the human race.
Sometimes human dealings seem verging on the shoddy.
But the same cannot be said of the uncommon Common Noddy.
*
---------------------------------------------------------------------- 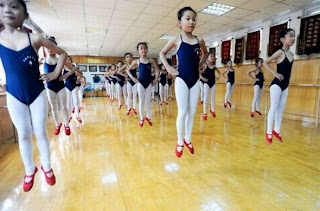 I don't care if it's Photo-Shopped!
I don't care if it's merged and cropped!
I don't care if it's quite unreal!
The image has a magical feel.
In unison, the little red feet
Perform this quite amazing feat!
Asiatics are represented
As people who are regimented!
We picture the ultimate precision,
The mind-over-matter firm decision,
The power to spring up and obey
In a very, very un-Western way.
In the West, a spring like this
Would  be a matter of hit or miss.
Some little girls would be seen mid-leap,
And three or four would be fast asleep!
Some would be looking to left or right;
Some would be at a too-high height!
In the West we muddle-through;
Apart from the stunning one or two
Who actually achieve perfection
While the rest of us look in another direction.
But I always picture the youth of China.....
Every one a toe-the-liner,
Submitting to discipline night and day
Leaping in a concerted way!
O.K.! It's probably Photo-Shopped!
And maybe such trickery should be stopped!
But this to me looks very Chinese!
Don't try to disenchant me, please!
*
Posted by Rinkly Rimes at 6:40 AM