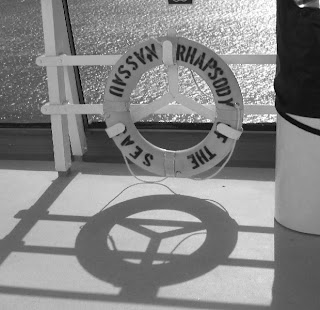 I've never seen anyone saved. Have you?
I presume they are sometimes used,
But they've always been a feature
Whenever I have cruised.
They seem rather solid, heavy things,
Not in the least pneumatic,
And being saved by one of them
Must be, in the least, dramatic.
There you are in the boiling ocean,
With waves about twelve feet high,
Towering over you, menacing,
And blotting out the sky,
When here comes a hard sort of doughnut,
Which may hit you on the head!
You'd shout a loud expletive
If you weren't so well-bred!
Your mouth is full of water,
Likewise your eyes and ears,
And the fins that are slowly circling
Ignite your wildest fears!
Now you have to grab the doughnut
And poke your head through the hole
But you have to duck under the water
To achieve that simple goal!
Whoa! Now the waves have got you!
They think you are a boat!
They toss you about in your little craft
Although you can scarcely float!
'Hold on!' they're shouting from starboard,
'See if you can catch this rope!'
And since you never were good at sport
There doesn't seem much hope!
If you survive this treatment
And actually survive
I think you deserve a medal!
You've managed to stay alive!
*
--------------------------------------------------------------------------- 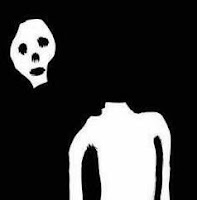 'It must be Alzheimers!' we cry!
At the thought we want to die!
But everyone forgets now and again.
When you're halfway through a door
You think 'What am I here for?'
You'll remember, if you just count up to ten.
*
The other day I heard
An encouraging little word
(Well, several in fact, but it had to rhyme!)
On the subject of forgetting,
Which can be quite upsetting,
And which happens  to the Writer all the time!
*
If a key is in your hand
And you just can't understand
Which door is opened by that certain key,
You're perfectly alright,
Quite unworrying your plight,
You know a key's an opener, you see.
*
But if a key lies there
In your hand and you just stare
Wondering what it does, you'd better worry!
Treatment may be needed
Your problem should be heeded
You should seek expert advice, and in a hurry!
*
Next time you have a lapse,
Half-way up the stairs, perhaps,
Consider what I've written and feel glad.
Your memory's OK
You're just having a bad day
Which is something every one of us has had.
*
-----------------------------------------------------
PS

On Wednesday we performed a melodrama called 'Between the Sheets' for a group called U3A. This stands for University of the Third Age, so I tried to be a bit more educational than usual! I started with a mini-lecture bout the History of the Melodrama. I once did a full-scale series of lectures on the subject so I was able to adapt my notes. Then we performed the play, and we finally got members o the audience to get up and act. Our Virgin turned out to be a male Psychologist so I don't know if he psychoanalysed me from my play! 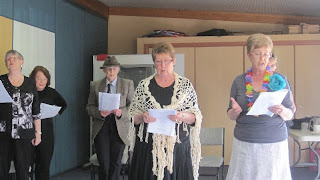 Not a great photo but at least it will remind me of a good day.

As usual, I love your rhymes! I like the life-belt photo - great shadows!