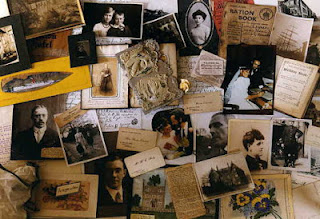 We tend to think of them as still, for that is how we see them.
They are caught by their technology and nothing can ever free them.
Their smiles are fixed, their limbs are stiff, their whole demeanour static,
Their very stillness meaningful and grave and quite dramatic.
Like flies preserved in amber they are captured and held fast
By the process of a camera that stultifies the past.
Some famous folk were captured by that clever moving reel,
But my ancestors merely gaze and do not seem to feel.
But, just before the photographer exhorted them to freeze,
Did they giggle a little bit; did they joke and tease?
'Your hair looks like a birds-nest, Maude!' 'Ivy! Don't make me laugh!'
'Behave yourselves! If we play-up we won't get a photograph!'
Victorian ladies and gentlemen were, in many ways, like us,
Though there were certain subjects the well-bred did not discuss!
Yet we've preserved their solemnity, set in amber, for all time.
We misjudge those captured images.........it almost seems a crime.
*
--------------------------------------------------------------------------- 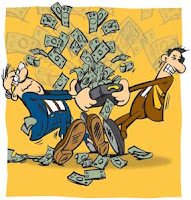 Fistfuls of dollars, hardly worth a cent!
Useless paper money, borrowed and then lent!
Notes that are crumpled, coins that are rusty,
Nothing that's reliable, dependable and trusty.
You can't trust a Banker in his well-cut suit;
*
Make no mistake, friend, he doesn't give a hoot
Our savings are his piggy-bank ; he takes us for a ride.
Nemesis should land on him and take away his pride.
Each banker's a magician, turning money into dust!
Your money, my money! We'll all go bust!
*

I totally enjoyed in Amber, nodding, sighing, grinning, then bursting into laughter. The dialogue is so well imagined! I will ask these questions in future. This is a wonderful take on photography.

It was impossible for me to transition to the second poem, so I'll come back later to see it.

Kerry's right, you make it seem so easy, and perhaps it is, with all the experience you have.
I enjoyed both poems, Brenda, the Victorian photos the most, though, I must admit! The idea of money being worthless rather scares me.
K

I love in Amber...you make rhyme seem as easy as picking up a pen. I struggle so with it.

fun! yes, indeed they always look somber... but i love your introduction of the teasing. yay!

Nice take on this...I often think of the life behind images such a s these.

Knowing some of the folk in those photos I can tell you that you got Amber just right! It does almost seem a crime and yet they too would laugh at their own solemn preservation.

Hello Brenda, I've tried e-mailing you, without success. I'm wondering if you would give me permission to quote the lines

But my ancestors merely gaze and do not seem to feel.
But, just before the photographer exhorted them to freeze,
Did they giggle a little bit; did they joke and tease?

Yet we've preserved their solemnity, set in amber, for all time.
We misjudge those captured images.........it almost seems a crime.

I am compiling a tribute to all the Real Toads who used my photos that day and so far have permission from all but one other - who I also haven't been able to ciontact. There would of course be due acknowledgment and link.

I shall understand if you prefer me not to.