POETS UNITED
http://poetryblogroll.blogspot.com.au/
asks us to write about Salvador Dali

I'm an ignoramus, make no mistake about that.
I know less about ART, I bet, than your little pussy cat.
But I do have an opinion and I do like to make it known
And I become more strident if I find I'm on my own.
I love realistic paintings, and I love the abstract too
But loving Salvador Dali is something I can't do.
I can view his strange world with interest, as a psychologist might,
But wavy clocks and perverted features give me quite a fright.
They're all very clever, that's certain; I appreciate the skill.
But as items to sit and gaze at they fail, and they always will.
*
Now I have a little theory, and Salvador's in his grave
So he can't tell me I've got things wrong, and I can be quite brave.
I think he was 'yer average' painter, painting scenes that were sweet and calm,
Like this view of a lady, which, I think, has warmth and charm.

A Lady
But painting this sort of picture didn't happen to pay the rent
And Salvador Dali suffered, overcome with discontent.
Then, one day he was doodling, when a visitor came by
Who looked over the artist's shoulder and shouted 'That I'll buy!'
Dali probably said 'This rubbish! Why! I'm not even trying!'
And the visitor said 'Keep at it, and the whole world will be buying!
And while you're at it, grow a moustache that's completely over the top,
And when you look at people make sure your eyes go pop!'
So Salvador did as requested and the rest is history;
Everyone loves his paintings, except poor ignorant me!

I have trouble with 'love';
I think I'm often without it.
In fact I'm so unsure of it,
I rarely write about it.
The lady in the shot above
'Loves' her little bird to bits;
She tells him that she loves him,
For it's a word that fits.
I 'love' writing my Blog too;
Yes, there's that word again!
'Love' is a word that, too easily,
Slips into the human brain.
I don't think I'm unfeeling;
I'm certainly not cold,
But I've grown more  suspicious of 'loving'
As I've grown increasingly old.
Affection? Ah, that's something
I feel with frequency;
It's something warm and ordinary
That resonates with me.
'Love' is a different matter;
It's wild, intense, profound;
It's something too exalted
And my feet are on the ground.
'Affection's' not overwhelming;
It fits in to the everyday.
Yes, I think I'm living without 'love',
And I much prefer it that way.
*

This has been quite a week. In fact it's been so busy I've forgotten to take photos! Today I was the Reader and I was also in charge of the tape recorder (an old machine which is my pride and joy. If it dies I think I'll die too!)
On Saturday we went to Rathmines to a very funny concert. The first play had an adult acting as a baby making asides to the audience; the second one had two old ladies in a Nursing Home kidnapping the nurse! The plays were well-acted  and the refreshments were tasty, so it was a good evening all round.
On Monday we had a Committee Meeting and then I went to a Drop In Centre to read poems. Some of the members of the audience were unable to react but those members of the audience who were 'with it', including a very spry lady of 92, enjoyed the poems and laughed a lot.
On Tuesday I was The Leader at the Book Group. I chose the topic of Mills and Boone, with us all reading a different story and discussing the genre. It started as a serious discussion about social issues but it ended with a fair amount of hilarity.
On Wednesday we had a large audience of ladies at a local Bowling Club and we performed our Bold-and-Beautiful type play with a lot of audience involvement.
And today we've performed 'Cinderella' at a local Nursing Home. The old people enjoyed the pantomime-type story because they already knew it. As I say, I forgot to take photos, so when we met at the Sugar High Restaurant for lunch (I had a tasty chicken wrap) I got the owner to take a group photo. We had a little 'private room' at the rear of the restaurant which was rather nice and the wrap was delicious.
If any Novocastrians read this the restaurant was  the 'Sugar High on Lawson' and I'm sending this to the lady who served us to show her how happy we were. 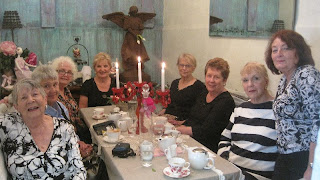 An extra Angel joined us! 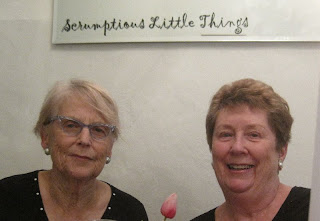 I couldn't resist this photo of Ros and Yvonne sitting under an appropriate sign!
Posted by Rinkly Rimes at 4:19 PM