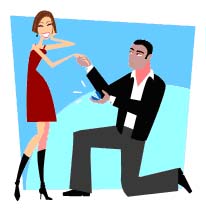 asks us to write on the subject of 'Promises'

A promise is a malleable, wishy-washy thing;
It's something rather different from a vow.
A vow suggests a consequence, if it's disregarded;
A promise is thing of 'just for now'.
If one vows there's the suggestion of a Higher Power involved;
One's immortal soul is, so it seems, involved;
There will be retribution if one breaks a solemn vow;
One has sinned and one can never be absolved.
But promises, like pie-crusts, are broken all the time;
We laugh-off broken promises each day.
We cross fingers held behind our backs to show it's all a game;
We forget a promise made just yesterday.
So should somebody promise you the earth, be well aware
That off his tongue the words are tripping lightly;
For, should he break the promise he'll go blithely on his way;
His conscience may be pricked, but very slightly.
Get him to vow, down on his knees and on his Mother's life!
And take a note of every word that's spoken!
Squeeze every ounce of drama from the great romantic scene!
A vow is far less likely to be broken.
*
-------------------------------------------------------------------------------

Have you been in this situation?
Someone receives a standing ovation.
They've completed an aria (for this read 'dirge')
And the whole audience has the urge
To jump to its feet and shout 'Bravo!',
Very, very 'Con Brio.'
'Wasn't that thrilling!' they say en masse.
But you, being lower class and crass,
Have found the whole thing rather dreary.
Culture has made you utterly weary.
You've sat through the thing just being polite,
Wishing it were more melodic and bright.
You're really relieved it's over and done.
But the evening's battle isn't won
Because as 'Encore!' is repeated,
You find you're the only person seated!
You glance around. Yes, there they are
Still cheering on the blushing star.
This is a dilemma; what do you do
When you find the odd man out is you?
You probably do what I have done....
You dare not be the alternate one.
You're not brave enough to be sincere;
You slowly rise and shout 'Hear hear!'
Shame 'doth make cowards of us all.'
*
Now it's standing ovation wall to wall.
*