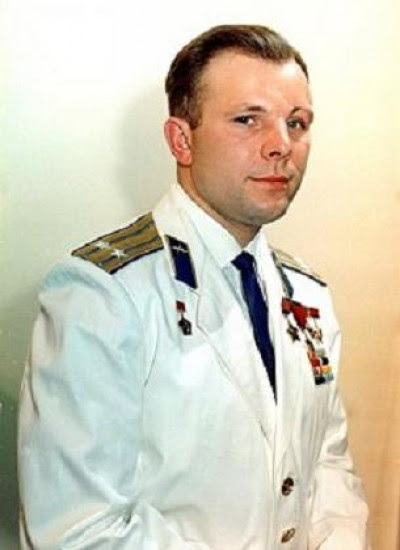 ﻿
YURI
Did you see me waving, Yuri, as you sped across on high?
Did you see us standing on the steps gazing up into the sky?
We were in Darkest Africa. You were in Outer Space.
Both of us, at that certain time, in our chosen proper place.
'Let's go and watch for the Spacecraft' we said, after our meal.
Looking back, the whole thing seems utterly unreal!
My little earthly adventure was to travel overseas,
To leave my homeland far away for tropical destinies.
I found myself in a boarding-school, with other youthful teachers.
Looking back, compared with you, we were pedestrian creatures!
Your other-wordly adventure was to dare to take your place
As the very first man in history to venture into Space!
Did you know you scared me, Yuri? The Cold War was at its height
And Russia was declaring its overwhelming might.
You intruded on our colony, invading African skies,
The fact that we felt threatened was really no surprise.
And yet we were excited; this was all so new!
If Man could venture into Space what else could humanity do?
So 'Let's go and watch for the Spacecraft' we said as we went outside,
This was part of History; we were going along for the ride.
I remember the sky was cloudless, as black as black can be,
With the stars pricked-out like jewels, or boats on a coal-black sea.
I remember waiting and waiting, chin tilted to the sky
As the chill night wrapped around us and a night-time breeze blew by.
And then! We saw it moving! One star was not a star!
We actually saw you overhead, though you were up so far!
You seemed to move quite slowly, you seemed to be quite near;
Only a dot, but a friendly dot. I forgot about my fear.
I felt a wave of history flowing from you to me.
I was waving to you Yuri.
What a pity you couldn't see!
*
Posted by Rinkly Rimes at 4:49 PM

He died so young - poor man! - and never lived a 'normal' life again after his space flight. What an achievement, though, and in the full knowledge of how dangerous and ill-planned it was.