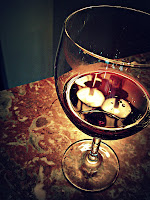 It was an evening of wrong choices!
First there was my date.
She really blotted her copybook
By being two hours late!
I'd met her on the Internet,
Where her photo caught my eye.
She turned up with her head half-shaved,
So the photo was a lie.
I'd chosen 'La Gorgonzola'
As a restaurant of repute.
It boasted 'An Intimate Setting'
So I felt that it would suit.
It turned out to be too intimate;
I couldn't have swung a cat!
All the other tables were empty!
I should have smelt a rat!
At first I admired the table-cloth,
With its patterns in burgundy,
The swirly-curly patterns
Looked quite alright to me
Until I saw they were wine stains!
The cloth had started out white!
But many a glass of red wine
Had been spilt on it each night!
I voiced my peeves to the waiter,
Grumbled with might and main,
And, suddenly Ada shouted
'You do nothing but complain!
I expected a pleasant evening
But you are just a drag!'
And out she flounced with a parting shot.....
'I've really lost my rag!'
It was then I saw the lipstick
She'd left on the side of her glass!
Well, that was hardly romantic!
I couldn't let it pass!
'If there's one thing I hate it's your lipstick'
I shouted as she went!
*
An evening of wrong choices......
Not the best I've ever spent!
* 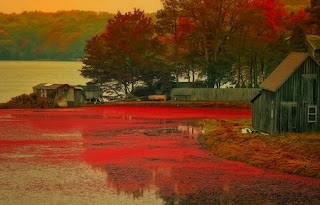 There's something new at every turn,
Something new I'm glad to learn.
I'd never heard of a Cranberry Bog
Until I began to write a Blog!
I know that well-known Cranberry sauce
Eaten with turkey meals of course,
But I never knew how they were grown!
And, maybe, folks, I'm not alone.
Maybe other people aren't aware
That in Massachusets they're common fare.
*
Planted in bogs that are often dry,
The bushes grow till till they're quite high.
Then, when when harvest time comes round
Farmers flood the surrounding ground.
They wade knee deep into the water
And have a sort of cranberry slaughter!
They knock the fruit off left and right!
As it floats it's a wondrous sight.
Blue water suddenly turns deep red;
Not a bog, but a Cranberry Bog instead!
Then they harvest the fruit ! It's easy, very;
They can capture every berry!
*
I'm very glad I've got a Blog
For it's taught me about the Cranberry Bog!
*
Posted by Rinkly Rimes at 2:59 PM

A lesson to be learned here - internet dating sites beware! To many Ada's and Abe's out there. On the other hand, cranberries are good and to be pursued!

I love the choices you made in 'Wrong Choices' - good response to prompt and that's fascinating about Cranberries! I'm off to Google to find out more. Thank you!

The idea of internet dating gives me the horrors ...loved your poem, brilliant!

Yuk to the first one - what a horror date!
I didn't know about cranberry bogs - how interesting and what a sight they must be.

Very sweet and tragi-comic. And yes, I liked the rhyme. :-)

LOL, love that first poem. Great finish to that.

the 2nd one has brilliant imagery,

Invite you to join poets rally week 42 by sharing a free verse today.

You will love the encouragements you get once you are in and make commitment.