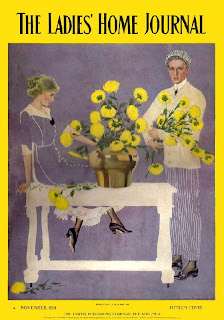 
FASCINATING BOOK COVERS
http://workofthepoet.blogspot.com/2011/04/fascinating-book-covers_14.html
(In my case, a magazine)


SENSITIVE NEW AGE GUY!﻿
Here's a  magazine cover from a hundred years ago!
When life was rather different from today.
This one quite intrigues me because I want to know
What attitudes to life are shown in play.
*
This was the age of the macho man,
Though the word was quite unknown,
When the world was run to a masculine plan;
Only kings were on the throne.
There were no queens, not in the house,
Women always toed the line;
Man was man and woman was ....mouse;
She was never allowed to shine.
Yet here's this rather soppy bloke
Bringing a sweet bouquet!
Would he have been treated as a joke?
And what would the lady say?
'For goodness sake, Algie, put them down;
They're all over the place and floppy!
Not only that but you look a clown!
Effeminate and soppy!
Pull your cap peak over your eyes!
Take off those silly shoes!
I'm looking for hairy-chested guys
And you're not one I'd choose!'
But no! She looks quite satisfied
With the silly-looking fellow!
In fact she views the fop with pride
And the blossoms of bright yellow!
*
Maybe she guesses that, in three years,
He'll be off to fight a war,
One which will bring everyone to tears,
A war like none before.
Maybe she guesses that he'll die
Alone in a sea of mud;
Maybe yellow won't catch his eye,
Just red, the colour of blood.
Or he may come back a shattered man,
He may return to her mad,
And she'll have to nurse him as best she can,
For silly has turned to sad.
*
Maybe it's better we do not know
What lies in our future years.
What is certain is that tears will flow,
Some of laughter, some of tears.
*
---------------------------------------------

THE SOURCE OF THE EXPECTATIONS!

I speak of two similar ladies, who certainly never met,
Whose lives were the stuff of melancholy, sadness and deep regret.
Charles Dickens 'invented' one of them; the other lived real life,
But destiny decreed that neither ever became a wife!
Eliza Donnithorne's family lived in New South Wales,
And her sorry story is chronicled among old Sydney's tales.
The family arrived from India and Father built an estate,
But Eliza was single at thirty, which, for marriage, was quite late.
She met a lowly shipping-clerk and she became enthralled;
We don't know how she met him; George Cuthbertson he was called.
In 1856 they planned the marriage celebration,
And, the family being notable, there was local jubilation.
The populace sought to watch the show and began to line the streets,
And a glorious banquet was prepared, with rare and tasty treats.
But where was George, the bridegroom? He'd vanished in thin air!
She looked for him at the altar, but he made no appearance there!
It was obvious she'd been jilted! Eliza was distressed!
She dismissed her friends and family; she dismissed each waiting guest.
From that day on, for thirty years, she wore her wedding gown!
She never ventured from her house or wandered into town!
The wedding-breakfast lay untouched till it mouldered and decayed!
She was soon known as a crazy witch, and people were afraid!
A chain was kept on the big front door to hold the door ajar,
Just in case George came back to her from journeying afar.
He never came, he never wrote, they never, never met,
And all her life was lived from then in a state of deep regret.
In 1886 she died, still in her wedding-dress!
For thirty years she'd lived a life of morbid unhappiness!
*
All this is true and chronicled, but there are implications.....
That she became 'Miss Havisham' in the book 'Great Expectations'.
Charles Dickens had a nephew in Australia, it is true,
And the two of them wrote letters as relations often do.
Dickens may have read in letters of the Sydney broken heart,
And included the character in his book; all part of the author's art!
But there's another mystery that's linked to this strange tale.
Maybe Eliza was a fraud! Maybe she was a MALE!
Arrival records and passenger lists relating to the case,
Merely speak of an only son! Of daughters not a trace!
Was 'she' a boy child all along? Were 'she' and George both gay?
Or did George make a discovery and decide to run away?
We'll never know for sure, of course, at this late stage, and yet
Eliza and 'Miss Havisham' are symbols of regret.
*
Posted by Rinkly Rimes at 11:10 AM

Eliza the inspiration for Miss Havisham? Intriguing, but how sad a life to lead, whatever the reasons for her jilting.

O what fascinating tales your poetry spins! Adored both! And the magazine cover is certainly intriguing and begs many questions!

very pretty and unique!
thanks for sharing!

check out mine too, it's cute!
Cute Yellow Plane