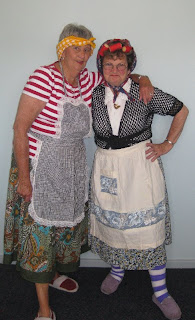 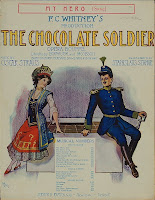 THE CHOCOLATE SOLDIER
George Bernard Shaw was a scholarly man who wrote for the educated;
His plays were political messages and very highly rated.
He wrote a play called 'Arms and the Man' which tells a pleasant story
Of a girl, and a soldier from Switzerland who's not covered himself in glory.
At the time she's engaged to another man, who has idealistic notions.
This soldier is a realist but he stirs the girl's emotions.
It may sound quite romantic but it was a serious play,
A satirical look at the attitudes of folk in the writer's day.
A composer by the name of Straus sent Bernard Shaw a letter
Asking if he could turn the tale into an operetta.
An operetta is a play with music as you know,
And it's not surprising that the answer to his request was 'No!'
However, Shaw relented, but he made some stipulations.....
None of his names were to be allowed and none of his conversations.
He washed his hands of the enterprise to the extreme extent
That he signed away all financial gain..... he wouldn't earn a cent!
He thought the musical rubbish; he decried it left and right
Until he heard how the people cheered in the theatre each night!
'The Chocolate Soldier' it was called; it became a terrific hit
And George Bernard Shaw, the writer, had no right to benefit!
He probably kicked himself, you know, for it cannot be denied
He'd missed out on a fortune because of his foolish pride.
*
Posted by Rinkly Rimes at 12:01 PM

I can identify with the poor lass in "Bus Stop" because when I was a young woman I worked the night shift at a hospital and had to wait in the dark on a lonely corner for a bus. At the time I also had an ex-boyfriend who had threatened to kill me. To say that I was terrified while waiting for the bus is an understatement.

Your poem brought it all back in vivid detail.