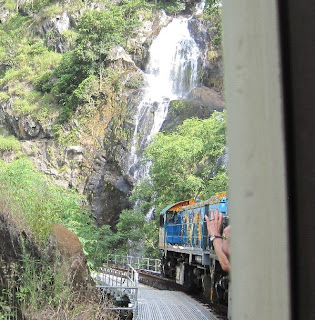 TOUGH STUFF!
Cora was no longer young and she had a nasty fall
Tripping over little Billy Johnson's soccer ball.
At the hospital they bandaged her which wasn't very nice
And then the doctor spoke to her and gave her some advice.
'Rest the leg for several weeks. Sit in easy chairs.
And on no account are you allowed to climb up any stairs!'
After several weeks he called around to see if she was better
And he could tell that she was fit the moment that he met her.
'My goodness me!' the doctor said 'You've recovered very well!
You can live a normal life at once; you're healed now, I can tell.'
'It'll be great to use the stairs!' Cora said with a joyful shout,
'Going up and down that drainpipe has almost worn me out!'
*
Posted by Rinkly Rimes at 6:29 PM

Wow that is really close. Must of been a scenic ride.

Wonderful capture of the waterfall. It must have been a scenic train ride.