DRASTIC MEASURES
Monty had an awful cold, and he thought it might be flu,
So he visited his Doctor to see what he could do.
The Doctor gave him several pills and suggested time in bed.
'You should be right as rain quite soon' the cheerful Doctor said.
Monty did as he was told, obeying to the letter,
But, sad to say, as time went by, he felt not one whit better.
Once more he sought the Doctor's help to battle his infection;
The doctor thought a bit and then he gave him an injection.
'Go home and rest and it will work in no time you will see.'
So Monty did as he was told, exactly, to a T.
Again the dreadful cold persisted; the worst he'd ever caught!.
Back to the surgery he went, quite feverish and distraught.
He pleaded with the Doctor 'For Pete's sake find a cure!
This snuffling and this hacking cough I really can't endure!'
'There's only one thing for it' said the Doctor 'Take a shower.
Then stand in front of an open window naked for an hour.'
'Are you crazy?' blurted Monty. 'It's winter-time and freezing!
I think you're making fun of me; you surely must be teasing!'
Then the Doctor said 'I'm serious! And this will work for sure!
Because then you'll catch pneumonia! And that's something I can cure!'!
*
--------------------------------------------------------------------------- 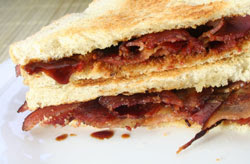 A sandwich can be ho-hum and not worth thinking of,
But Bardinas are the sandwiches you're very sure to love!
The ingredients may shock you, but we know you'll love the taste
And not one single little crumb will ever go to waste.
Fry sardines (yes, fry them) with oysters and with bacon.
The aroma will be captivating if I'm not mistaken!
Add the peas and garlic until they're heated through.
You're nearly there! There's really not a great deal more to do!
Take two slices of toasted bread; spread one with cheese and sauce.
Top it with sardine mixture, then the other toast, of course.
Eat it very quickly before it's snatched away!
This will be a recipe you'll use another day!
*

A nice sandwich, you made me such a lust, i`m going to make one.