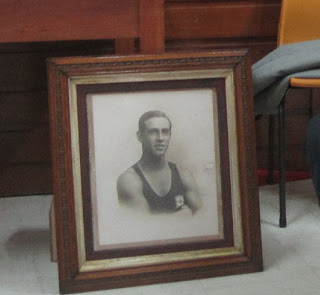 SEPIA SCENES
http://sepiascenes.blogspot.com/2011/04/sepia-scenes-129.html
WHAT WASTE!
Soon it will be ANZAC Day when Australia remembers
The men who've died in Wars across the years.
We're serious at Dawn Services, singing hymns as daylight breaks,
And then old men trade memories over beers.
This was a young life-saver from Bar Beach, a local surf-club;
He was killed in action in the 14-18 War.
A speaker delved into his life at one of our club meetings,
And I sighed and thought 'Whatever was it for?'
He was described in detail as charming and good-looking,
Six foot four and with a healthy tan,
Good at saving lives whenever raging surf demanded;
All in all a young god of a man.
And was the world changed one whit by his so-untimely passing?
I think not, so his death was just a waste.
Young men are dying as I write, in more such useless battles.
When, oh when, will carnage be replaced?
*
------------------------------------------------------------------ 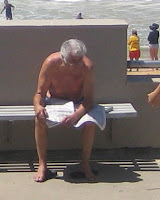 KEEPING INFORMED!
Children screaming like things set free.
The wild waves roaring on the rolling sea.
The sea-gulls swooping with a noisy screech.
The loud kerfuffle of the summer beach.
Leave me be, let me read my paper,
Away from any noisy caper.
Grandfathers have the right to refuse
To be tempted away from the daily news.
*
Posted by Rinkly Rimes at 4:05 PM

War is carnage, of that there's no doubt, but sometimes it's inevitable. I wonder, though, at the 'justification' - too often promoted through self-interest, I fear, and not often enough through altruism.