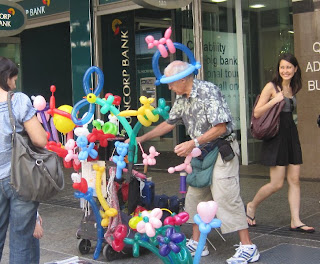 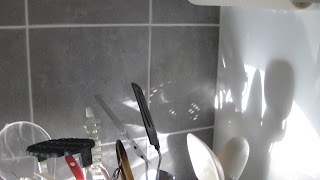 Here, the shadows are as real as the implements themselves!
For you wont find much to call 'Home-Made' upon my kitchen shelves.
The equipment stands around alright, looking very near efficient,
But at whipping-up the Cordon Bleu I'm hopelessly deficient!
Chops and mash I can manage, and maybe an Irish Stew,
But my attempts at pastry are mercifully few.
I do smart things with cans of soup; bought cakes are often served,
So Queen of the Kitchen's a title that is very undeserved!
But nobody has starved as yet; they're all used to my cooking.
And at least the spatulas and things are reasonably good-looking!
They're admiring themselves on the tiling, yes, that's what they're about!
I can hear them murmuring
'When's she going to take us out?'
*
Posted by Rinkly Rimes at 4:39 PM

Just popping over to visit your Color Carnival shot. So glad to see you have still been playing along :-)