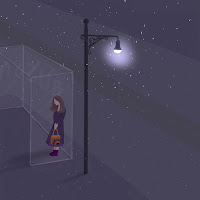 BUS STOP
'The blue of the night'. It sounds romantic,
But I smell fear instead.
Her thoughts are verging on the frantic
As they circle in her head.
Utter darkness would be as bad
But the spotlight is unnerving;
Though the midges circling make her glad,
With their fluttering and swerving.
At least they're living creatures
And they strike a merry note....
Not like someone with ugly features
Grabbing her by the throat!
No that's her imagination!
That way madness lies!
Should she walk along to the station?
Or would that not be wise?
If only she had company
To join her in her wait!
She 's rescued from her misery
By the Number 38!
*
------------------------------------------------------ 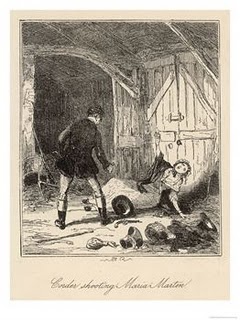 SHOOTING TO KILL!
(The true story of Maria Marten. Material for many a melodrama!)
A lantern light from deeper in the barn
Shone on a man and woman in the door.
'Come in , come in' young William Corder said
'We'll spend a night of passion, that's for sure.
We'll marry in the morning, my sweet love.
Tomorrow we will flee away from here;
Our coming child will bear my noble name!
You'll be an honest woman! Never fear!'
Maria Marten entered in the barn,
She thought she would be wealthy and quite grand.
She looked for love-light in his blazing eyes!
Too late she saw the pistol in his hand!
He buried her beneath the bales of hay
And fled to London, happy with his scheme,
But Maria's Mother caught the felon out,
By witnessing the murder in a dream!
*
Posted by Rinkly Rimes at 4:55 AM