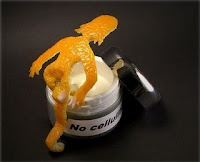 CELLULITE
Oh how I hate the apple which is smooth and round and bright,
And not in the least affected by the dreadful cellulite!
I have a seething hatred for the beastly little grape,
Which also is unblemished and a neat and rounded shape.
Why should a cherry glisten and reflect the morning sun?
Why is it that the orange is the only pock-marked one?
I agree, the poor old lemon and the grapefruit also suffer,
But my skin's more indented and the texture seems much rougher.
They are distant cousins. I avoid them when I can.
A lemon's such a sour thing and quite an also-ran.
But the pear sits in the fruit-bowl in yellow pride indulging!
And it's such a fascinating shape! Part thin and then part bulging!
A pineapple, I must agree, has troubles of its own,
But at least it can defend itself; that's why its spikes are grown.
Then, look at the banana! Now there's a skin to sigh for!
Skin that's smooth and rubbery and a yellow that I'd die for.
Now I step into this treatment in the hope that I'll emerge
Quite free from all my cellulite; that most unpleasant scourge!
I'll have a skin that's good to stroke, and shiny in the sun,
I'll get rid of my cellulite and start to have some fun.
I'll find the nearest apple and I'll kick it in the shin!
And, for the first time in my life, I'll be 'happy in my skin'.
*