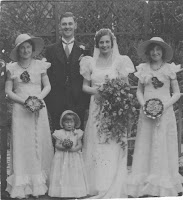 VIOLET
My mother was thirteen
(She'd now be called a 'teen')
When a little baby sister came along.
She was allowed to name her
Choosing something that became her,
And Auntie felt that what she chose was wrong!
'Not Violet Gwendoline!
How could you have been so mean!
Now I'm stuck with it!' the little sister pouted!
But my mother paid no heed
And completely disagreed;
'It's a lovely name; there's just no doubt about it.'
'I'll shorten it to 'Vi';
That way I'll get by!
I just can't live with Violet you see!'
So just 'Vi' she then became,
Quite a simple little name,
And she was always 'Auntie Vi' to me.
When her wedding-day arrived
Echoes from the past survived,
And violets were scattered everywhere.
Her dress and bouquet too
Were a lovely violet hue;
She'd realised it had a certain flair.
One bridesmaid, I recall,
Was two years old, that's all,
Dressed all in mauve and proud as she could be.
I recall her little bonnet,
And bouquet with violets on it.
Yes, I know you've guessed....
That little girl was me!
*
Posted by Rinkly Rimes at 4:54 AM

Fun poems about weddings! I always enjoy your site.