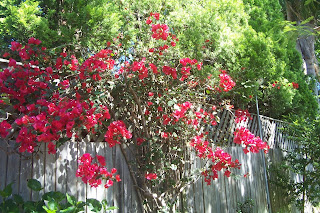 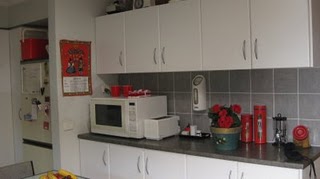 RED FOR REMINISCENCE.
Rebecca went to Europe when she was twenty-one.
She met a lot of people and she had a lot of fun.
She returned with a loaded suitcase with presents for us all.
She is that sort of person......presents, wall-to-wall!
I must have received a dozen, from everywhere she'd been.
If you look at my kitchen photo one of them can be seen.
A little tea-towel from Austria, with a recipe displayed,
A recipe for Strudel, telling how it should be made.
My kitchen, at that time, was green, then various different hues;
But red was never suitable so red I didn't choose.
But, a while ago, my kitchen changed, becoming a sparkling white,
So after twenty hidden years my tea-towel's in full sight.
And I've bought more reds to match it! There's much mirth from my son,
Who counted all the reds in view and said they were overdone!
But I've an added reason, for 'painting the town red'.
If you could see, there's a red plate on the wall behind my head.
It was made for me by my mother a year before she died.
She was well into her nineties, so I view the plate with pride.
A little touch of scarlet and my kitchen has become
A thankyou to my daughter and a little touch of 'Mum'.
*
Posted by Rinkly Rimes at 5:44 AM

I would love to live where bougainvillia grow too. Well, my sister does so I can always visit her.

How nice to have the red plate from your mum and to have added more red over time.

I enjoyed both your poems, Brenda. Whether a remark about flowers or pretty plate made, the people we knew and loved that have since passed away don’t fade when they live in our minds. And it is never too late for those memory triggers to come out of boxes and hidden places. :)

I enjoyed the short stories of these people in your past. I can see why she love the bougainvillea. I think they are one of the prettiest. I have several in hanging baskets. Even managed to keep them through the winter. They are in full bloom now.